Parliament members voted 330-231 to pass the Withdrawal Agreement Bill on its third reading after several amendments were defeated after three days of debate and disputes dating back to the 2016 Brexit referendum.

The bill will now go to the upper house of Parliament next week and could progress to be put into legislation if it goes through without any changes, paving the way for Britain to leave the European Union later this month as planned and helping Johnson to fulfill his promise to finish the transition by the end of this year.

Johnson has warned members of the House of Lords to not make any changes, which could slow progress since the House of Commons would have to consider them as amendments.

Though Johnson has succeeded where his predecessor Theresa May failed in getting Brexit legislation through Commons, he does not have the same advantage in the upper house.

Still, his spokesman said Thursday's vote was a "significant positive step," toward his goal to "get Brexit done."

Johnson's plan is similar to May's, but replaces her backstop mechanism that would have kept Northern Ireland aligned with the European Union customs union in the absence of a formal trade deal in the post-Brexit transition with a de facto customs border in the Irish Sea between Northern Ireland and the rest of the United Kingdom.

The deal was expected to pass the House of Commons after Johnson's Conservative Party won a majority of seats there in a snap election last month.

Britain will remain under the European Union's rule of trade until the end of the year under the deal and Johnson said he expects to reach a trade deal in that time.

However, European Commission President Ursula von der Leyen said the timeline was too short and there were potential trade barriers if Britain leaves the European Union without a trade deal. 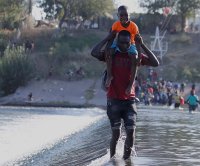 World News // 11 hours ago
DHS accelerates flights to deport migrants to Haiti amid Texas border surge
Sept. 18 (UPI) -- The Department of Homeland Security said Saturday it has ramped up deportation flights to Haiti this weekend amid an increase in migrants at the border in Texas. 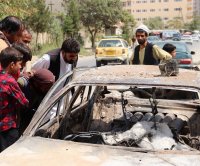 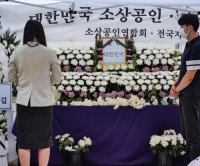