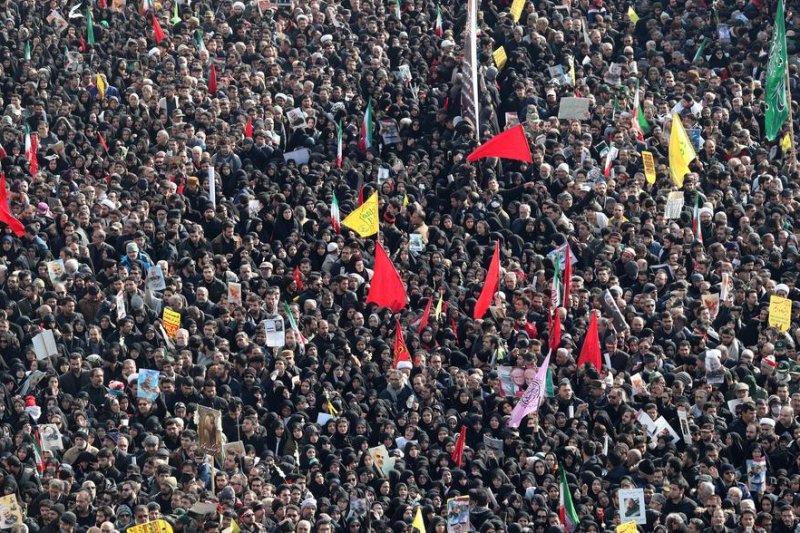 A crowd described as being in the millions attended the funeral ceremony of slain Iranian Revolutionary Guards Corps commander Qassem Soleimani Monday in Tehran. Photo by Abedin Taherkenareh/EPA-EFE

Jan. 6 (UPI) -- Chanting "death to America," a crowd described by state media as in the millions packed central Tehran on Monday to mourn the death of Iranian general Qassem Soleimani, who was killed in a U.S. airstrike.

A sea of mourning Iranians braved the cold to gather at Engelab Square in central Tehran to commemorate Soleimani, whose assassination at Baghdad airport has generated an outpouring of anger and patriotism across Iran and elsewhere, with vociferous calls for revenge.

Soleimani's daughter, Zeinab, spoke to the massive crowd, vowing the United States, Israel and it allies would pay dearly for her father's death.

"America and Zionism should know that my father's martyrdom has awakened more human instincts on the resistance front," she said. "It will make life a nightmare for them and shatter their spider houses."

"We promise to continue Martyr Soleimani's path with the same strength and his martyrdom will be reciprocated in several steps by removing the U.S. from the region," he said, adding, "This important goal will be attained under the Supreme Leader. The revenge for Soleimani's martyrdom is a promise given by God, as the God is the main avenger."

Soleimani is to be buried in his hometown of Kerman in southeast Iran on Tuesday.

Among the repercussions to the U.S. drone strike that killed Soleimani was an announcement from Iran that it will no longer limit its commitment to a 2015 nuclear deal with six major powers -- an accord already scrapped by the United States. After a cabinet meeting, Iran said in a statement that cooperation will continue with the U.N. watchdog, the International Atomic Energy Agency.

Foreign Minister Javad Zarif called it the fifth and "final remedial step" Iran will take under the deal since it first started distancing itself from it in May, but that all moves are reversible upon its other signatories maintaining their obligations.

Meanwhile In Iraq, the parliament voted unanimously in a resolution to expel foreign troops from the country. About 5,000 U.S. troops are in Iraq as part of an international coalition against the Islamic State.

The 328-member parliament passed the resolution by a vote of 170-0, with Sunni Arab and Kurdish lawmakers mostly abstaining. The resolution is nonbinding, but Iraqi Prime Minister Adel Abdul Mahdi had asked parliament to vote to end foreign troop presence."At the invitation" of the Iraqi government, American troops are in the nation, according to the resolution.

Trump threatened sanctions on Iraq should U.S. troops be expelled.

"If they do ask us to leave, if we don't do it in a very friendly basis. We will charge them sanctions like they've never seen before ever," Trump said Sunday night. "It'll make Iranian sanctions look somewhat tame."

Trump added: "We have a very extraordinarily expensive air base that's there. It cost billions of dollars to build. Long before my time. We're not leaving unless they pay us back for it."

On Saturday, Trump posted on Twitter that if Iran attacks American assets, the United States will strike "very hard and very fast."

"Iran is talking very boldly about targeting certain USA assets as revenge for our ridding the world of their terrorist leader who had just killed an American, & badly wounded many others, not to mention all of the people he had killed over his lifetime, including recently hundreds of Iranian protesters," Trump wrote in a series of tweets.

"He was already attacking our Embassy, and preparing for additional hits in other locations. Iran has been nothing but problems for many years. Let this serve as a WARNING that if Iran strikes any Americans, or American assets, we have targeted 52 Iranian sites (representing the 52 American hostages taken by Iran many years ago), some at a very high level & important to Iran & the Iranian culture, and those targets, and Iran itself, WILL BE HIT VERY FAST AND VERY HARD. The USA wants no more threats!"

That number matches hostages taken in the 1979 takeover of the U.S. Embassy in Iran.

Hossein Dehghan, the military adviser to Ayatollah Khamenei, told CNN the tweets were "ridiculous and absurd," saying Trump "doesn't know international law. He doesn't recognize U.N. resolutions, either. Basically he is a veritable gangster and a gambler. He is no politician. He has no mental stability."

The Iranian military adviser noted that "it was America that has started the war. Therefore, they should accept appropriate reactions to their actions. The only thing that can end this period of war is for the Americans to receive a blow that is equal to the blow they have inflicted. Afterward, they should not seek a new cycle."

While aboard Air Force One after departing from South Florida on Sunday night, Trump reiterated the United States will strike back if attacked. "If they do anything there will be major retaliation," Trump said, including cultural sites, according to pool reports.U.S. Secretary of State Mike Pompeo backed Trump's threats."

The American people should know that we will not waver," Pompeo said on CNN on Sunday. "We will be bold in protecting American interests and we will do so in a way that is consistent with the rule of law."

He added: "We're trying to restore deterrence that frankly is a need that results directly from the fact that the previous administration left us in a terrible place with respect to the Islamic Republic of Iran. ... We have developed a strategy to convince the Iranian regime to behave like a normal nation. That's what our strategy is about. We've been executing it."

Iraq's Foreign Ministry filed a complaint in two letters to the president of the United Nations Security Council, Dang Dinh Quy, the ambassador of Vietnam, and U.N. Secretary-General Antonio Guterres about the "American attacks and assaults against Iraqi military locations," according to a Foreign Ministry statement.

Hassan Nasrallah, the leader of Iran-backed Lebanese armed group/political party Hezbollah, has promised to expel U.S. forces from the Middle East in "just retribution" for the killings."

He added: "Soleimani is not only an Iranian issue, He is all of the axis of resistance. Soleimani is the Muslim nation."

On Sunday, the U.S.-led coalition suspended operations against the Islamic State in Iraq and Syria because protecting U.S. forces at their bases "is our No. 1 priority."

"As a result we are now fully committed to protecting the Iraqi bases that host Coalition troops. This has limited our capacity to conduct training and to support their operations against Daesh [Islamic State] and we have therefore paused these activities, subject to continuous review."

Additional U.S. troops are being dispatched to the Mideast.

About 3,500 paratroopers from the 82nd Airborne Division at Fort Bragg in Fayetteville, N.C., are being deployed to Kuwait, the Fayetteville Observer reported. Soldiers are leaving within 18 hours of the call. More than 50,000 soldiers are based at Fort Bragg.

Relations had been strained with Iran even before the drone attack. Trump withdrew the United States from the landmark nuclear deal and reintroduced sanctions that previously had been lifted in accordance with the pact. Trump has wanted to force Iran to negotiate a new deal that includes halts on the development of ballistic missiles.

But the Joint Comprehensive Plan of Action had remained in effect with Britain, Russia, France, China, Germany and the European Union.

Terrorists attack military base in Kenya that houses U.S. soldiers

World News // 9 hours ago
Doubts surface over hydrogen as an energy and heating source
Sept. 27 (UPI) -- Hydrogen is emerging as an alternative to conventional fossil fuels such as natural gas, but it may not be as suitable as advocates expect.

World News // 17 hours ago
North Korea says U.S. joint naval drills may lead to 'brink of war'
SEOUL, Sept. 27 (UPI) -- North Korea's ambassador to the United Nations blamed the "growing hostility" of the United States for his regime's nuclear weapons and warned that U.S.-South Korea naval exercises could lead to the "brink of war."

World News // 22 hours ago
Canada to sanction dozens in Iran amid anti-regime protests
Sept. 26 (UPI) -- Canada will impose sanctions against dozens of people and entities in Iran, including its so-called morality police, as the country's regime brutally cracks down on protests.
Advertisement