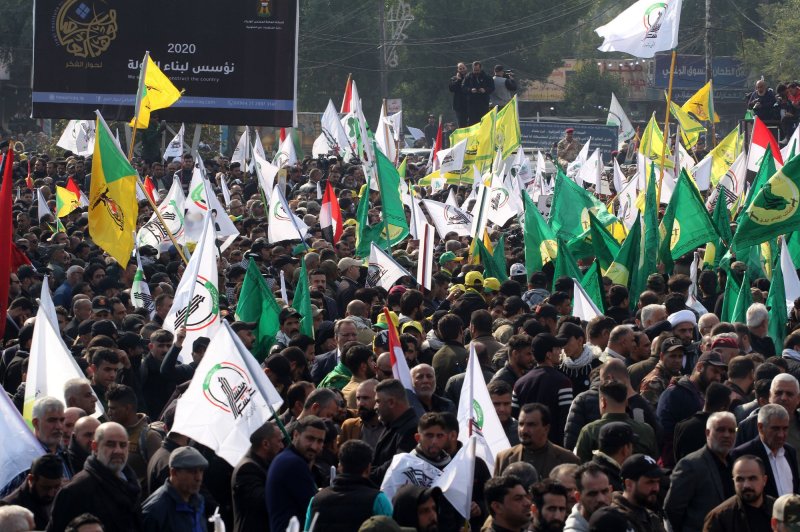 The mourners -- dressed in black and raising flags of the Iran-backed Iraqi Popular Mobilization Forces, an umbrella group of which Muhandis was deputy leader -- first gathered near the Shiite shrine of Kadhimiya to pay respects.

"We are here to mourn the death of these brave fighters, Soleimani and Muhandis," Amjad Hamoud, 34, who described himself as a PMF member, told Al Jazeera. "Both of them sacrificed their lives for the sake of the Shia world and for the sake of Iraq."

Mourners who had gathered in Baghdad marched along with the convoy as Solemani's body reached the crowds, chanting "you never let us down."

Mourners also chanted "Death to America," as they escorted the coffins of the military leaders through the streets of the Iraqi capital.

Meanwhile, Iranian President Hassan Rouhani called the killings a "grave mistake" in a statement and said the United States "will face the consequences of this criminal act not only today, but also in coming years."

PMF spokesman Mohannad Hussein told Al Jazeera the funeral processions will end at Hurriya Square in central Baghdad where the public can pay their final respects before the bodies are taken to the holy Shiite city of Karbala where funeral prayers will be held later Saturday.

Among the mourners were mostly PMF supporters, Iraqi Prime Minister Adel Abdul Mahdi, who stepped down in November after mass anti-government protests started in October, but remains in office in a caretaker capacity, and several Shiite leaders.

The U.S. Department of Defense announced Thursday that Soleimani, the head of Iran's Islamic Revolutionary Guards Corps's Quds Force, was killed in an airstrike near Baghdad's international airport. Muhandis, an adviser to Soleimani, was also killed in the attack.

President Donald Trump ordered the strike after protesters angered by deadly U.S. airstrikes Sunday against Kataib Hezbollah, a member of the umbrella group, stormed the U.S. Embassy in the Iraqi capital of Baghdad on Tuesday.

U.S. military officials announced Friday that the Pentagon would send up to 3,500 additional troops to the Middle East as tensions rose.

In the United States, more than 40 demonstrations were planned Saturday across the country to protest the Trump administration's decision to kill Soleimani and send the additional troops to the Middle East.

A U.S. based anti-war coalition, Act Now to Stop War and End Racism, in conjunction with more than a dozen organizations, spearheaded the protests.

Trump told reporters at his Mar-a-Lago resort in Palm Beach, Fla., on Friday that the U.S. airstrikes were not to seek regime change.

"We took action last night to stop a war," Trump said. "We did not take action to start a war."

On Saturday the British Foreign Office warned British nationals not to travel to Iraq, except for essential travel to the Kurdistan region, and to only travel to Iran if it's absolutely necessary.

World News // 21 hours ago
Explosion at Pakistani mosque kills at least 48, injures many others
Jan. 30 (UPI) -- A suicide bomber allegedly detonated an explosive vest during crowded afternoon prayer at the Police Lines Mosque, officials said. About 150 were injured in the attack, some in critical condition.

World News // 20 hours ago
Russia launches widespread attack on Ukraine, kills 3 in Kherson
Jan. 30 (UPI) -- Ukraine faced widespread attacks from Russia on Monday, including the shelling of residential areas in the recently liberated city of Kherson, where three people died and 10 others were injured, officials said.

World News // 20 hours ago
WHO: COVID pandemic remains an emergency, but not for much longer
Jan. 30 (UPI) -- The COVID-19 pandemic may be approaching an ''inflection point'' where increased immunity levels may limit the impact of the virus on morbidity and mortality, the World Health Organization said Monday.

World News // 22 hours ago
Renault to lose 28% stake in Nissan in restructuring deal
Jan. 30 (UPI) -- Two of the world's biggest auto manufacturers have agreed to overhaul their decades-long partnership in a restructuring deal that would significantly curtail Renault's controlling interest in Nissan.

World News // 23 hours ago
Royal Philips says it will cut 6,000 more jobs
Jan. 30 (UPI) -- Dutch medical device maker Royal Philips announced Monday it will lay off 6,000 employees worldwide, half of those by the end of this year.