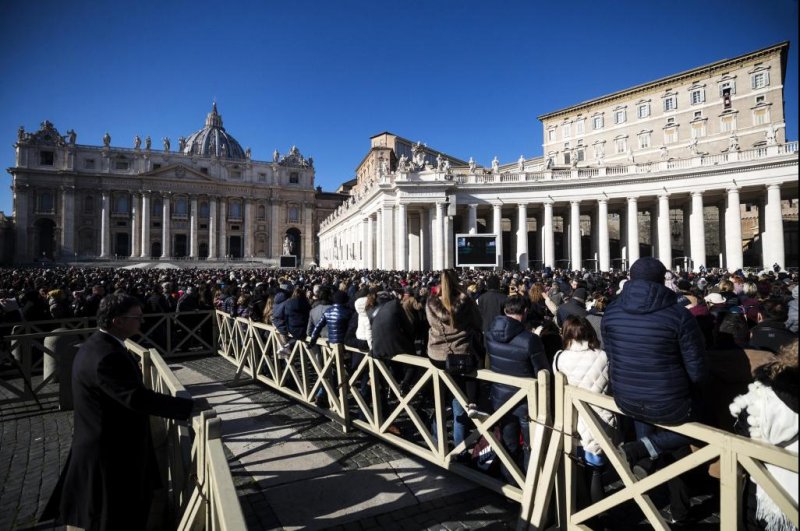 Jan. 1 (UPI) -- Pope Francis entered 2020 apologizing for a lack of patience and a slapped hand.

While greeting well-wishers on New Year's Eve on his way to visit Vatican City's nativity scene, a woman grabbed the Pope's hand and pulled him back towards the crowd lined against the barricades. Video showed Pope Francis slapping the woman's hand to free himself. In the footage, the Pope appeared upset by the interaction.

Hours later, just before issuing his New Years Day address, Pope Francis apologized for his actions, saying even he loses his patience sometimes.

"I apologize for the poor example yesterday," he said.

The Pope used his Wednesday morning address to condemn violence of all kinds against women.

"By how we treat a woman's body, we can understand our level of humanity," Pope Francis said.

Speaking to a crowd of worshipers that had made the pilgrimage to St. Peter's Square, the Pope called for gender equality.

The theme of his address echoed a series of tweets issued early Wednesday.

"Let us begin the year in the sign of Our Lady, the woman who wove the humanity of God," Pope Francis wrote on Twitter. "The rebirth of humanity began with woman. If we want to weave humanity into the webs of our day, we must begin again with woman."

World News // 2 hours ago
Brazil threatens to follow U.S. pullout of WHO amid pandemic
June 6 (UPI) -- Brazil has threatened to leave the World Health Organization over alleged bias as the South American country recorded the the second-highest number of cases of the coronavirus.

World News // 3 days ago
Tropical Storm Cristobal on track to strike U.S. Gulf Coast
June 5 (UPI) -- After Cristobal regained tropical storm status on Friday, the storm continued to strengthen over warm waters of the Gulf of Mexico on Saturday.

World News // 1 day ago
Suspect in Madeleine McCann case linked to missing German girl
June 5 (UPI) -- Authorities said Friday a new suspect in the mysterious 2007 disappearance of 3-year-old Madeleine McCann is now being investigated for a similar case in Germany.

World News // 1 day ago
U.N.: Violence in Congo leaves 1,300 civilians dead over 8 months
June 5 (UPI) -- About 1,300 civilians have been killed in the Democratic Republic of the Congo amid conflict involving government forces and armed opposition groups, the United Nations High Commissioner for Human Rights said Friday.