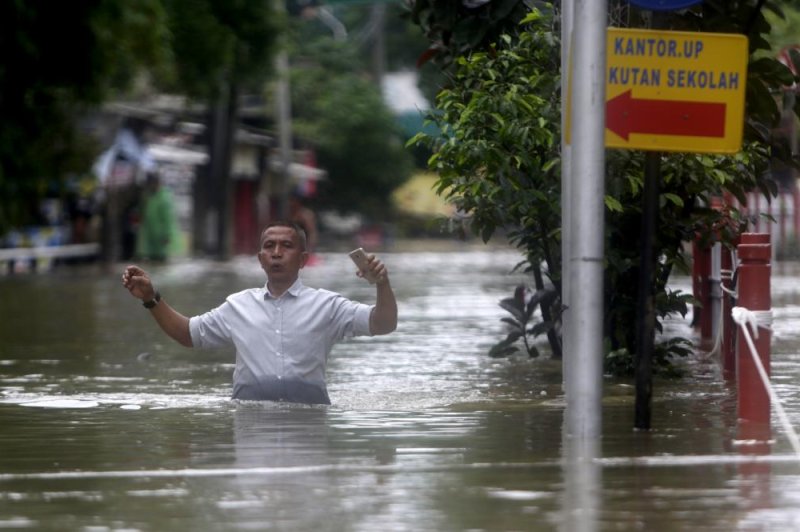 Of the 16 victims, eight were in the capital Jakarta, four in Keasi city and two deaths were reported in Bogor and Tangerang regions, the agency said Thursday in an update. Most of the deaths were the result of hypothermia and drowning.

"Currently, BNPB continues to collect data from various sources and [there is] the possibility of increasing the number of victims," the agency said in the statement, referring to itself by its initials.

More than 120,000 rescue workers have been deployed to assist residents in evacuations and install water pumps. Authorities warned schools and local offices that the emergency may require the use of their facilities to shelter and care for those displaced by the floods.

Baswedan said a total of 19,109 residents have been evacuated to higher ground.

"I want all the officials in the Jakarta administrations to make sure that all government buildings and schools are ready to be used as evacuation shelters," Baswedan said. "Prepare public kitchens, healthcare posts, medicines, sleeping mats, public toilets and other basic needs for evacuees."

The torrential downpours brought transportation in the region to a standstill, as floodwaters submerged roads, railways and runways.

Jakarta's airport has been closed since midnight on New Year's Eve, and the Transportation Ministry's air transportation director-general Polana B. Pramesti said officials can't predict when the water will recede enough to allow flights in and out of the Indonesian capitals to resume.

Jakarta, Indonesia's largest city, is sinking and regularly experiences flooding during the wet season, but the floods that rang in the New Year are the worst the city's experienced since 2013.

The risk of extreme flooding is expected to get worse as the city sinks and sea levels rise. As Business Insider reported last year, officials want to spend billions of dollars to both fortify the region's major rivers and relocate many of the most flood-prone parts of the city. The relocation efforts could see hundreds of thousands of people moved, but the plans are likely to take more than a decade to complete.

World News // 3 hours ago
China: Biden's SOTU comments 'not conducive to building trust' amid tensions
Feb. 8 (UPI) -- China's foreign ministry spokesperson Mao Ning hit back at President Joe Biden Wednesday for comments during his State of The Union address that she implied sought to drive division between the two countries.

World News // 4 hours ago
TotalEnergies doubles net profits with help from higher energy prices
Feb. 8 (UPI) -- The price Total Energies sold its crude oil at during the fourth quarter was roughly $10 per barrel higher than during fourth quarter 2021.

World News // 5 hours ago
IEA: Utility emissions are at a "tipping point" due to increase in renewable energy
Feb. 8 (UPI) -- Global demand for electricity is on the rise, but so too are advancements in low-polluting renewable sources of energy, the Paris-based International Energy Agency said.

World News // 9 hours ago
New Zealand intercepts $317M worth of cocaine left floating in the Pacific
Feb. 8 (UPI) -- New Zealand authorities announced Wednesday the seizure of a 3.5 ton haul of cocaine with a street value of $317 million in a major anti-drugs operation carried out in the middle of the Pacific.
Advertisement