Dec. 27 (UPI) -- Attorneys for former Pakistani President Pervez Musharraf filed a challenge Friday to the death sentence given him on treason charges, saying a special court rushed to judgement at trial.

Musharraf, who seized power in a military in coup in 1999 and was Pakistan's president from 2001 to 2008, was sentenced to death on Dec. 17 by a special three-member anti-terrorism court.

In the legal challenge to the ruling in Lahore High Court, Musharraf attorney Azhar Siddique said the special court "rapidly and hurriedly wrapped up the trial which was far from conclusion" and the complaint was filed against the former president "in an unlawful manner."

The petition also blasted a section of the verdict written by Justice Waqar Seth that said Musharraf's corpse should be hung for three days in front of Pakistan's Parliament building if he dies before he's executed.

"[Seth] has crossed all religious moral, civil and constitutional limits, while ruthlessly, irreligiously, unlawfully, unrealistically awarding a debilitating, humiliating, unprecedented and against the dignity of a person sentence," the petition states.

The court handed down the unprecedented verdict against Musharraf for imposing a state of emergency in violation of the constitution in 2007 to extend his near-decade rule. The charges had been pending since 2013.

The former leader has been in Dubai since 2016 when he was removed from a no-fly list to receive medical treatment. From a hospital bed earlier this month, the 76-year-old Musharraf called the charges against him "absolutely baseless" and said he was being "victimized."

"I have served my country for 10 years," he said. "I have fought for my country." 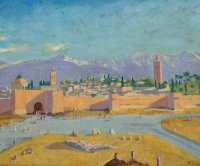