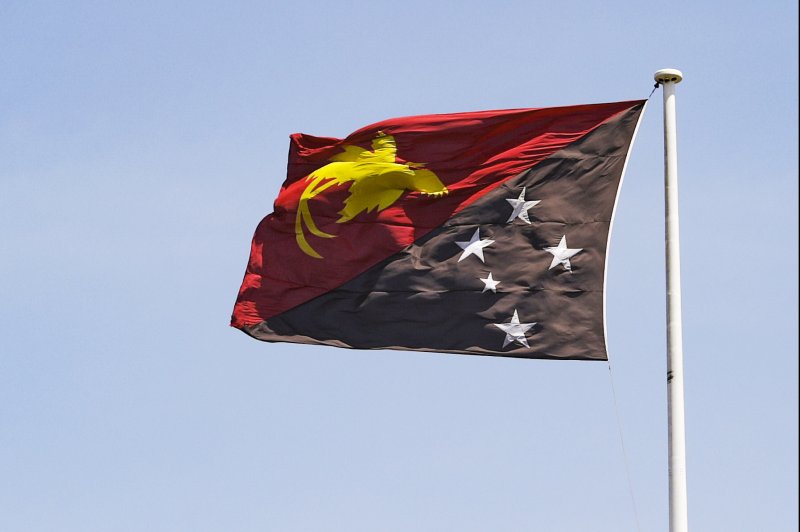 The national flag of Papua New Guinea is seen in Port Moresby, Papua New Guinea. The Pacific island nation will have the final say in Bougainville's bid for complete independence. File Photo by Fazry Ismail/EPA-EFE

Bougainville Referendum Commission Chair Bertie Ahern, reading the results in Buka, said 97 percent voted in favor of autonomy from Papua New Guinea -- nearly 177,000 of about 181,000 ballots -- over a two-week period.

Bougainville is an autonomous region of Papua New Guinea.

The non-binding referendum was part of a peace agreement forged nearly 20 years ago, which brought an end to a bloody, nine-year civil war in the Bougainville region, located in the Solomon Sea about 500 miles east of the Papua New Guinea mainland and 1,000 miles northeast of Australia.

An estimated 20,000 people, about 10 percent of Bougainville's population, died during the the conflict, fought from 1988 to 1998. At the center of the independence battle was mineral wealth from the world's largest open-cut copper mine at Panguna, a key element of Papua New Guinea's export profits. The mine has remained closed since the conflict.

As a result of the referendum, Papua New Guinea and the Bougainville regional government are expected to begin formal negotiations for independence. The talks could continue for years, and Papua New Guinea Parliament would have the final say.

World News // 15 hours ago
25 killed after hundreds of inmates escape Haiti prison
Feb. 27 (UPI) -- Twenty-five people died after more than 200 prisoners escaped from a prison in Haiti, including a gang leader and the prison's director.