Denuclearization is off the table, North Korean diplomat tells U.N. 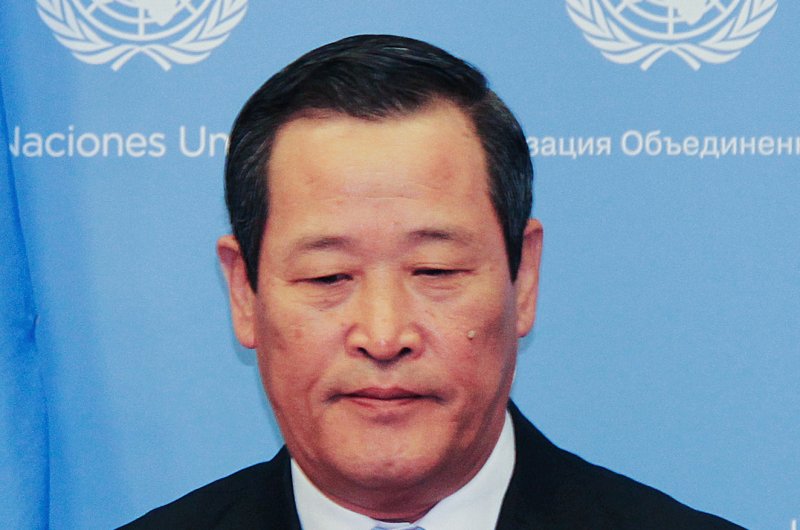 North Korean Ambassador to the United Nations Kim Song, shown here at a May press conference in New York, said Saturday that denuclearization is "off the table" in talks with the U.S. Photo by Yonhap South Korea Out/EPA-EFE

President Donald Trump acknowledged that talks on denuclearization had become more hostile but also that his relationship with leader Kim Jong Un was still positive and he expected it would remain that way.

"I have a very good relationship with Kim Jong Un," Trump said Saturday. "I think we both want to keep it that way."

"We do not need to have lengthy talks with the US now and the denuclearization is already gone out of the negotiation table," the ambassador, Kim Song said in a statement obtained by CNN. Ambassador Kim also described the United States' pursuit of dialogue was a "time-saving trick" meant to benefit a "domestic political agenda."

RELATED 'Dotage of a dotard': War of words heats up between U.S., North Korea

The ambassador's remarks came at the end of a week in which Trump and North Korean leaders traded barbs and reprised the use of old nicknames in comments to the press.

On Tuesday Ri Tae Song, a diplomat in charge of U.S. affairs, warned that North Korea could send an undesirable "Christmas gift" to the U.S. if it does not change its approach to relations with the country.

The same day Trump called Kim Jong Un "Rocket Man," a name he's used for the leader since 2017, said the U.S. has the most powerful military in its history and said "hopefully, we don't have to use it, but if we do, we'll use it."

In response North Korean First Vice Foreign Minister Choe Son Hui said, "If any words and expressions stoking the atmosphere of confrontation are used once again on purpose at this crucial moment, it must really be diagnosed as the relapse of the dotage of a dotard."

That term, too -- which refers to an elderly person with diminished capacity -- was first used against Trump by Kim John Un in 2017.

Relations improved in 2018, when North Korea agreed to denuclearize after a summit in Singapore, but a second summit in Vietnam ended abruptly without an agreement. Relations have remained at a stalemate since, and North Korea has returned to testing missiles.

World News // 2 hours ago
Prince Philip laid to rest in St. George's Chapel
April 17 (UPI) -- Millions of people around the globe watched Saturday as Prince Philip, the longest-serving consort of a British monarch, was laid to rest at Windsor Castle in a small funeral limited by COVID-19 restrictions.