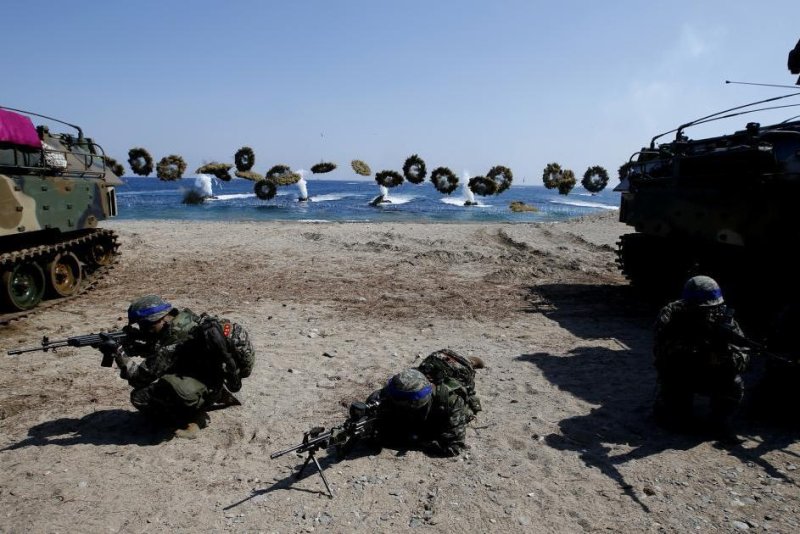 The United States and South Korea have yet to settle differences in defense burden sharing negotiations. There are about 28,500 U.S. troops stationed on the peninsula. File Photo by Jeon Heon-kyun/EPA-EFE

Dec. 5 (UPI) -- The fourth round of negotiations over defense burden sharing between the United States and South Korea ended without a major agreement, according to Seoul's foreign ministry.

In a statement issued following the talks, the South Korean foreign ministry said the two sides were unable to narrow differences on the principles of "equity and rationality," according to the report.

In the brief statement to reporters, Seoul said its diplomats called for consultations "within the framework of the SMA," and with the purposes of "strengthening the U.S.-South Korea alliance."

In November, the third round of negotiations had ended abruptly amid U.S. demands for as much as $5 billion in South Korea's share of annual defense costs; the next round of talks is expected to take place in Seoul mid-December.

U.S. President Donald Trump has said Seoul should pay more for U.S. troops on the peninsula.

On Tuesday, during a meeting with NATO Secretary-General Jens Stoltenberg, Trump said the United States is "paying a tremendous amount of money to protect South Korea."

"Last year, I asked them to pay more and they agreed," Trump said in London on Tuesday.

The United States and South Korea have pledged to maintain a combined defense posture against regional threats.

The Rivet Joint's deployment comes only two days after its most recent deployment to the peninsula.

Lack of progress on U.S.-North Korea dialogue has experts worried Pyongyang could engage in more weapons tests in 2020.

Cheong Seong-chang, a South Korean analyst with the Sejong Institute, recently said there is a high likelihood North Korea could launch more submarine-launched ballistic missiles in 2020, according to News 1.

World News // 14 hours ago
More than 2,000 dead in Turkey, Syria after earthquake, powerful aftershocks
Feb. 6 (UPI) -- A powerful earthquake and an aftershock that was nearly as powerful as the original tremor hit southern Turkey and northern Syria Monday, killing more than 2,000 and leaving nearly 10,000 injured.

World News // 1 day ago
Woman dies, at least 41 others rescued after migrant boat sinks off Greece
Feb. 5 (UPI) -- A woman died and dozens of others were rescued after a boat carrying migrants sunk Sunday off the coast of the Greek island Leros.

More than 2,000 dead in Turkey, Syria after earthquake, powerful aftershocks