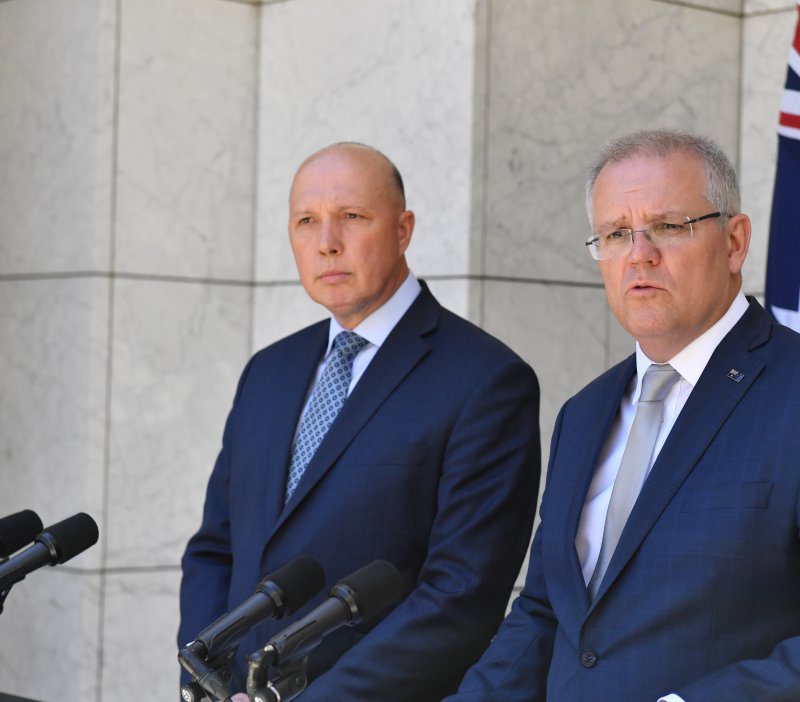 Minister for Home Affairs Peter Dutton (L) and Prime Minister Scott Morrison (R) speak during a press conference at Parliament House in Canberra, Australia, on Wednesday after the repeal of a law allowing asylum seekers to be sent to Australia for medical treatment. Photo by Mick Tsikas/EPA-EFE

Dec. 4 (UPI) -- Australia's Parliament on Wednesday voted to repeal a law that allowed ill asylum seekers to be transferred from offshore detention centers to the mainland for medical treatment.

Home Affairs Minister Peter Dutton supported Wednesday's vote against the law, saying that sending the refugees to Australia for urgent medical treatment allowed them to immigrate to the country "through the back door."

Asylum seekers attempting to reach Australia by boat are detained indefinitely at processing centers on the islands of Nauru or Manus in Papua New Guinea. A coroner investigating the death of an Iranian migrant in 2014 determined the facility on Manus Island wasn't properly equipped to death with some illnesses.

But others said that ditching the law puts patients on the islands in danger.

"Preventing access to medical care as a policy tool is unethical and harmful to vulnerable people and the entire medical profession," said Paul McPhun, executive director of Doctors Without Borders.

"Make no mistake, this repeal comes against the medical advice of many individual doctors and Australian professional bodies as well as MSF -- an internationally recognized independent medical humanitarian organization that worked with asylum seekers and refugees on Nauru," he added, using an alternate acronym for the organization.

World News // 1 day ago
Ukraine pulls remaining troops out of Severodonetsk
June 24 (UPI) -- After months of relentless shelling of Severodonetsk by Russian troops, Ukrainian officials said they will withdraw troops from the key eastern hub city on Friday.

World News // 2 days ago
At least 3 dead in Ecuador protest clashes
June 23 (UPI) -- Anti-government protests in Ecuador over rising costs in fuel, food and other basic needs have rattled the capital of Quito for days, leading to at least three deaths and hundreds of arrests.
Advertisement