A protester walks near graffiti calling for a free Hong Kong in Hong Kong. Photo by Thomas Maresca/UPI | License Photo

Dec. 2 (UPI) -- China retaliated against the United States on Monday for signing legislation in support of pro-democracy protesters in Hong Kong by suspending port calls by U.S. military ships to the embattled region and imposing sanctions against non-governmental organizations.

Foreign Ministry spokeswoman Hua Chunying said during a regular press conference that China is suspending reviews of requests from U.S. military vessels and aircraft to visit Hong Kong in response to President Donald Trump on Thursday signing the Hong Kong Human Rights and Democracy Act into law that allows the United States to punish the Asian nation for infringing upon Hong Kong's autonomy.

China also sanctioned several NGOs, including Human Rights Watch, the National Endowment for Democracy, the National Democratic Institute for International Affairs, the International Republican Institute and Freedom House, Hua said, blaming them for fueling the months of instability that have rocked Hong Kong.

"There is a lot of evidence proving that these NGOs have supported anti-China forces to create chaos in Hong Kong, and encouraged them to engage in extreme violent criminal acts and 'Hong Kong independence' separatist activities," she said. "They have a large responsibility for the chaos in Hong Kong and deserve to be sanctioned and pay the price."

Freedom House said it does not look to the Chinese Communist Party for "permission" in its mission to support democracy, political freedom and human rights.

"We offer solidarity to the people of Hong Kong, who need little guidance from others in standing up for their rights," Freedom House President Michael J. Abramowitz said in a statement. "... The Chinese Communist Party's most recent actions will only strengthen our resolve as we continue to oppose its well-documented efforts to undermine fundamental human rights."

After Trump signed the law last week, China's Ministry of Foreign Affairs promised countermeasures against the United States who it has repeatedly warned against implementing the act in support of the Hong Kong protesters, describing it as an attempt to interfere in its internal business.

"The United States must bear all consequences," it said in a statement.

"I signed these bills out of respect for President Xi [Jinping], China and the people of Hong Kong," Trump said in a statement. "They are being enacted in the hope that leaders and representatives of China and Hong Kong will be able to amicably settle their differences leading to long-term peace and prosperity for all."

Under the Hong Kong Human Rights and Democracy Act, the U.S. State Department is mandated to conduct a yearly review to see if Hong Kong's level of autonomy from mainland China warrants its special status under U.S. trade law and permits for sanctions to be imposed against Chinese officials for committing human rights abuses against protesters, among other provisions.

Hong Kong has been submerged in six months of mass protests that started out against a now-shelved extradition bill that has since evolved into a wider pro-democracy movement. 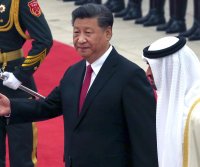