Nov. 20 (UPI) -- Speculation is growing in South Korea that the Trump administration is not ruling out the withdrawal of U.S. troops from the peninsula following remarks from U.S. Secretary of Defense Mark Esper.

Esper told reporters in the Philippines on Tuesday that he refuses to speculate whether the United States would consider reducing troops in South Korea.

"I'm not going to prognosticate or speculate on what we may or may not do," Esper said, according to Yonhap. "The State Department has the lead in these discussions, and I'm sure they are in capable hands. We just take this one step at a time."

Cho told the newspaper the statement is "shaking South Korean public opinion by inciting a crisis in the U.S.-Korea alliance." Opposition in Washington to U.S. troop withdrawal from Korea could be a hurdle for the Trump administration, however, he added.

The U.S. decision to end the meeting early has raised uneasiness among Seoul's politicians, including conservatives of the main opposition Liberty Korea Party.

Hwang is protesting President Moon Jae-in's handling of GSOMIA, a military intelligence-sharing agreement with Tokyo. Moon's administration has said it intends to not renew the agreement unless Japan reverses trade penalties against South Korea.

Hwang's colleague Na Kyung-won left for Washington on Wednesday as worries grow in Seoul the alliance is at risk.

LKP politicians have opposed the government's handling of GSOMIA and its pro-engagement North Korea policies. Some of its members have also spoken out against U.S. demands that South Korea pay nearly $5 billion annually for keeping 28,500 troops on the peninsula and for costs beyond Korea's borders.

World News // 3 hours ago
Xi Jinping calls for 'global internet' despite censorship at home
Nov. 23 (UPI) -- China wants to build a common cyberspace community with the outside world, Chinese leader Xi Jinping said during a conference that promotes the export of China's model of a highly regulated internet.

World News // 4 hours ago
Report: North Korean defector who vaulted over DMZ fence is former gymnast
Nov. 23 (UPI) -- The North Korean man who defected across barbed wire fences of the demilitarized zone this month is a former gymnast, according to a South Korean press report. 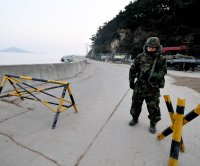 World News // 5 hours ago
Victims of North Korea shelling decry silence on Yeonpyeong anniversary
Nov. 23 (UPI) -- Parents of South Korean marines who died during the North Korean artillery shelling of Yeonpyeong Island mourned the deaths of their sons while condemning the downplaying of North Korean provocations. 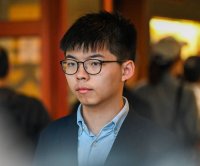 World News // 11 hours ago
Joshua Wong, 2 others plead guilty over 2019 Hong Kong protest
Nov. 23 (UPI) -- Joshua Wong and two other prominent Hong Kong pro-democracy activists pleaded guilty on Monday over their involvement in protests in the summer of 2019.