Mainland Chinese soldiers to clean up after Hong Kong protests

Nov. 16 (UPI) -- Mainland Chinese soldiers were deployed for the first time Saturday to clear the streets amid protests in Hong Kong.

Dozens of soldiers jogged out of their Kowloon garrison barracks in black shorts and green T-shirts and carrying red buckets to load bricks protesters left as roadblocks on Renfrow Road, near Baptist University. In addition to the soldiers, local residents helped with the cleanup, students said.

The deployment comes after five months of protests over a now-suspended extradition bill, which sparked speculation about the future of the Chinese army's role in the semi-autonomous coastal city.

The troops have been garrisoned in Hong Kong since the former British colony returned to Chinese control in 1997, but have mostly kept to their barracks. Under the city's Garrison Law, the army is not to interfere in local affairs, but can can be called out if the local government requests help with disaster relief or maintaining public order.

The move comes after a violent work week.

Security veteran and Democratic Party lawmaker James To Kun-sun called for the government to clarify if soldiers came out because of an official order from the military based on Garrison Law or another legal basis.

"This time, it doesn't look like voluntary service," To Kun-sun said. "It's more like assisting the maintenance of public order."

To Kun-sun said that if the soldiers are disregarding Garrison Law "it could be dangerous."

"They may say ... soldiers have been attacked ... then they can use heavy weapons," To Kun-sun said. "This is the most worrying thing."

A soldier in a video circulating on social media said cleanup had nothing to do with Hong Kong government.

"We initiated this! 'Stopping violence and ending chaos' is our responsibility," he said, quoting a phrase coined by Chinese President Xi Jinping.

The soldiers have not been involved in public community work in more than a year. In October of last year, more than 400 soldiers were deployed to help remove fallen trees in Hong Kong's parks after Typhoon Mangkhut.

Secretary for Security John Lee Ka-Chiu said last year the army could freely decide to send soldiers to perform voluntary services outside military sites and local government had no record of how often this occurred.

World News // 7 hours ago
Ongoing drought in Brazil, Argentina threatens crucial crop harvests
An unusually dry end to the summer season across parts of South America is expected to impact the harvests of important crops in the region.

World News // 9 hours ago
Egypt's most famous Giza pyramid lit up with tribute, safety messages
March 31 (UPI) -- Egypt's most famous pyramid is being used to relay important messages to residents near Cairo about the coronavirus outbreak.

World News // 11 hours ago
Syrian forces retake control of prison after inmates riot
March 31 (UPI) -- The Syrian Democratic Forces said it's regained control at a prison that was partly commandeered by inmates belonging to the Islamic State terror group. 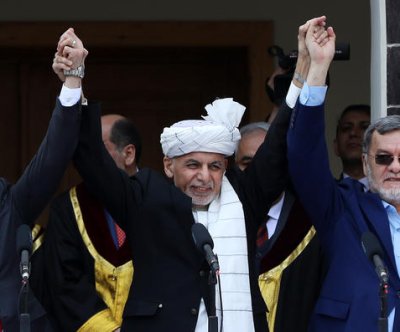 World News // 15 hours ago
Former Congo leader Joachim Yhombi-Opango dies of coronavirus
March 31 (UPI) -- Jacques Joaquim Yhombi-Opango, the former president of the Republic of the Congo, has died from complications related to the coronavirus disease, his family said. He was 81.

World News // 17 hours ago
Coronavirus outbreak deepens worldwide as China's industry rebounds
March 31 (UPI) -- China on Tuesday announced its manufacturing sector was recovering after its markets took a steep hit due to the coronavirus outbreak while countries the world over were tightening quarantine restrictions.