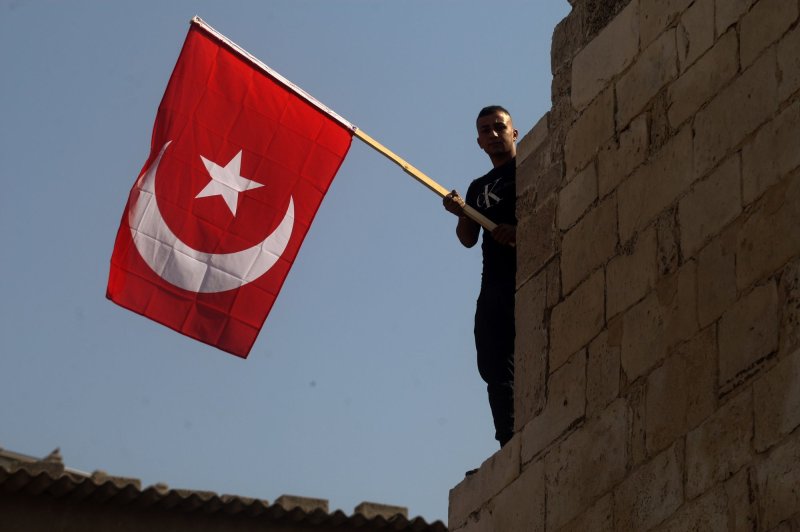 A demonstrator holds a Turkish flag at an October 14 rally to support Turkey's military action in northeastern Syria, in Khan Younis in the southern Gaza Strip. Photo by Ismael Mohamad/UPI | License Photo

Nov. 13 (UPI) -- Turkish forces say they have captured another terrorist leader of the Islamic State in Syria, a week after taking family members of slain leader Abu Bakr al-Baghdadi.

Ankara said it will start extraditing foreign terrorists this week to their native countries, regardless of whether they agree to accept them. Germany and the Netherlands have agreed, officials said. There are 10 German nationals presently being held by Turkey.

"We have our own policy and implement it uncompromisingly," Soylu said. "Turkey is not a hotel for foreign terrorists."

France has pledged to accept 11 of its citizens who joined the insurgent group, but Britain refused. A U.S. citizen was deported Monday and two Irish are being processed.

An international coalition opposed to the Islamic State will stage a meeting in Washington, D.C., Wednesday to discuss a number of issues, including extraditing foreign terrorists. Heads of state from Turkey, France, Germany and Britain will attend.

Baghdadi was killed by U.S. forces in Syria last month, and Turkey has taken into custody his sister, wife and child.

World News // 2 minutes ago
Record deaths, cases In Mexico strain health resources
Jan. 24 (UPI) -- The coronavirus pandemic has been surging to record daily deaths and cases in Mexico, straining the resources of hospitals and morgues despite a nationwide vaccination plan.