South Korean celebrity Seungri (C) may have been in contact with a senior police officer while he operated Burning Sun, a nightclub where victims were routinely raped and drugged. File Photo by Kim Chul-soo/EPA-EFE

Oct. 29 (UPI) -- A senior South Korean police officer has been arrested and charged with attempting to cover up illegal activities at nightclub Burning Sun, where wealthy clientele routinely raped and drugged women.

The police officer, a senior superintendent of the Seoul Metropolitan Police Agency, was identified only by his surname Yoon on Tuesday, according to Yonhap.

Yoon was arrested on charges of violating criminal law, including bribery, obstruction, insider trading and destruction of evidence, according to the report.

Drugging and rape incidents at Burning Sun continued for months despite complaints from victims, whose reports to the Gangnam district police went largely ignored.

Yoon is suspected of being aware of the crimes. He may have looked the other way while staying in touch with Seungri, the K-pop celebrity who owned the club.

Evidence from online chat rooms on South Korean platform KakaoTalk indicates Yoon may have been the person referred to as the "police chief" by Seungri and other accomplices.

Yoon is also suspected of receiving bribes, including from a business executive identified by his surname Jeong, according to local paper Kyunghyang Sinmun.

Jeong, the chief executive of local firm Nokwon C&I, provided undisclosed information on stocks to Yoon, a violation of securities exchange law in South Korea, according to the report.

South Korean police were able to transfer Yoon to prosecution, based on evidence Yoon, in breach of law, warned a drinking establishment, Monkey Museum, of pending police action for food sanitation violations at the establishment. Monkey Museum is also under the ownership of Seungri, the Kyunghyang reported.

In May, South Korea police arrested nearly 4,000 people on drug-related charges. The sweeping crackdown included raids at more than 100 entertainment establishments, where drug trafficking and prostitution were reportedly commonplace.

World News // 22 hours ago
Singapore's prime minister-to-be withdraws from consideration, citing age
April 9 (UPI) -- Singapore is on a search for its next leader after the country's handpicked successor to Prime Minister Lee Hsien Loong said he will step aside. 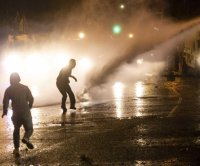 World News // 23 hours ago
Dig uncovers 'Lost Golden City'; largest ancient city ever found in Egypt
April 9 (UPI) -- Archaeologists in Egypt have uncovered a 3,000-year-old city that dates back to the era of ruler Amenhotep III, one of the country's most powerful pharaohs who reigned for almost four decades in the 1300s B.C.

World News // 23 hours ago
Iran releases South Korean tanker and crew captured at sea
April 9 (UPI) -- Iran confirmed it has agreed to release a South Korea-flagged tanker, more than three months after it was captured in the Strait of Hormuz.

World News // 1 day ago
St. Vincent evacuated due to volcanic threat
April 8 (UPI) -- Authorities issued an evacuation order for the Caribbean island of St. Vincent on Thursday after a volcano began showing signs of an impending eruption.