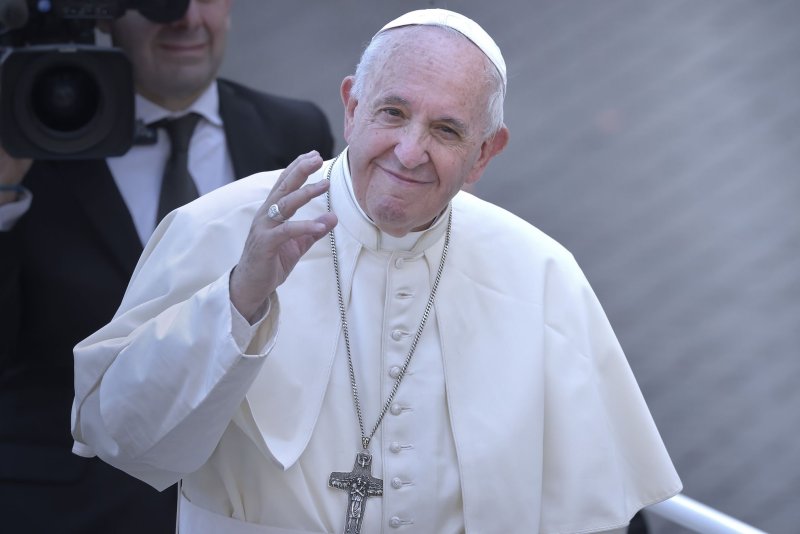 Pope Francis said he will take recommendations from cardinal bishops from South America into account, including the possibility of ordaining married men on a regional basis. Photo by Sefano Spaziani/UPI | License Photo

Oct. 26 (UPI) -- The Catholic Church could allow married priests while also ordaining women as deacons on a regional basis, based on recommendations from a gathering of cardinal bishops from the Amazon region of South America.

The nine-nation area has a shortage of priests that needs to be addressed. After listening to the cardinals' concerns, Pope Francis said he would assemble a commission to consider both issues.

"I am going to take up the challenge that ... you have put forward, that women be heard," Francis said.

The cardinals said Jesus entrusted women in the ministry, setting an example for the church today.

The Oct. 6-27 meeting in Vatican City also focused on serious threats facing the Amazon Basin, including the outbreak of wildfires in the rain forest this year. They want to define ecological sin and called for the churches across the region to move away from industries that hurt the environment.

All 120 paragraphs of the document were adopted by the assembly with the required two-thirds: 120 members of the 181 present for the voting.

"It's a sin against future generations and manifests itself in acts and habits of pollution and destruction of the environmental harmony, transgressions against the principles of interdependence and the breaking of solidarity networks among creatures and against the virtue of justice," the Cardinals said.

Cardinal Carlos Aguiar Retes, the archbishop of Mexico City, warned of dire consequences for the region if nothing is done.

"Our common home is at risk; the situation is urgent," Retes said. "If global warming goes much beyond two degrees, there will be [the risk of] catastrophe in the oceans."

He added that there's a risk of "desertification" caused by global warming where lakes and rivers dry up.

He added that there is strong resistance to these changes from those who have money and power.

"The real problem is that those who have the money impose the rules; this has happened down the centuries," Retes said. "But the government should regulate for the safeguarding of the environment against those economic interests. As church we cannot do it, but we can raise awareness. I think that is the task of the church: to awaken consciences."

World News // 17 hours ago
Dutch airline KLM faces suit over 'greenwashing'
May 24 (UPI) -- Environmental groups have filed suit against KLM, alleging the Dutch airline has falsely claimed to be environmentally sustainable in advertising to improve its image, which is greenwashing.

World News // 20 hours ago
Band of gunmen attack hotel, 2 bars in central Mexico; 11 killed
May 24 (UPI) -- Mexican police are searching for a group of gunmen who opened fire on a hotel and two bars late Monday, killing nearly a dozen people.

World News // 21 hours ago
Hong Kong cardinal denies failing to register fund that helped dissidents
May 24 (UPI) -- Cardinal Joseph Zen of Hong Kong, along with five other people, denied charges in court on Tuesday that they failed to register a relief fund that was assisting protestors who faced legal and medical fees.