Students bounce an inflatable earth ball near Gwanghwamun Square at a rally against climate change on Friday in Seoul. Photo by Kelly Kasulis/UPI

High school student Kim Joon-seo (L) and his teacher, Lee Sun-jung, pose in a mock funeral scene to mourn the dying Earth at a climate change rally in Seoul on Friday. Photo by Kelly Kasulis/UPI

Students draw on cardboard to create signs for a rally calling for action on climate change in Seoul on Friday. Photo by Kelly Kasulis/UPI

Lee Seo-gyeong, a 17-year-old high school student, holds up a sign at a climate change rally in Seoul on Friday. Photo by Kelly Kasulis/UPI

Students use finger paint and their handprints to create a banner for a climate change rally in Seoul on Friday. Photo by Kelly Kasulis/UPI

Demonstrators hold up signs calling for action on climate change at a rally in Seoul on Friday. Photo by Kelly Kasulis/UPI

SEOUL, Sept. 27 (UPI) -- Painting polar bears on their faces and scribbling messages calling for change on torn pieces of cardboard, hundreds of students gathered in Seoul's Gwanghwamun Square on Friday to call attention to climate change, feared as their generation's looming doomsday.

High school student Kim Joon-seo waited solemnly next to a candlelit altar, his arms crossed as he stood in a traditional funeral suit.

"Korean people don't think about the climate change issue very seriously," Kim, 18, told UPI. "It's very easy to ignore it. If the temperature keeps getting hotter, all we have to do is just keep turning up our air conditioning."

Young people all around the world have marched against climate change in recent weeks, and young South Koreans like Kim are determined to join the movement.

RELATED Poll: 62% worldwide -- but fewer than half in U.S. -- satisfied with climate efforts

A United Nations report released Wednesday warns that more than a billion people around the world could face severe water shortages and food insecurity by 2050 due to the effects of climate change.

Lee Sun-jung, 32, a schoolteacher who stood next to Kim in a grim, all-black dress, held up a mirror that said, "The more you don't respond [to climate change], the more you die."

"Honestly, as a teacher, I'm very worried. The temperature has dramatically gotten hotter since I was a student," she said. "I worry about the state of the earth in the future when my students are adults."

The effects of climate change are not lost on South Koreans, nor Seoul's sleek, hilly metropolis streets. The number of "tropical nights' with a minimum temperature greater than 77 degrees in Seoul have increased in recent decades, and higher temperatures mean more damage to crops from insects on the nation's farms as well as smaller yields from coldwater fisheries.

Meanwhile, rainfall across the country continues to get more intense, with the annual precipitation of six major cities shooting up by roughly 19 percent in a single century.

"Truthfully, I'm constantly thinking about all the different issues that come from climate change, and I'm worried about all of it," Lee Seo-gyeong, a 17-year-old high school student at the protest, told UPI. She had a picture of the Earth painted on her face and held up a sign that said "school strike for climate change."

"In the spring, the sky is always so cloudy and you have to be careful and wear a face mask because the air is really dangerous," Lee Seo-gyeong said. "There was also this one time when I saw on the news that someone died because of the high heat, and from that moment I realized that I should care about climate change."

As students marched toward the presidential Blue House, some called for more action from the South Korean government.

"I hope that the government will hear our message and treat climate change as an emergency," Lee Seo-gyeong said. "I also hope that South Korea will use more electric cars in the future and stop factories from running on fossil fuels."

Since taking office in 2017, South Korean President Moon Jae-in has tackled a number of environmental issues by creating a hydrogen economy roadmap and establishing a national task force to fight hazardous fine dust pollution (the task force is headed by former U.N. Secretary-General Ban Ki-moon). Since, the country has committed to putting roughly 2,000 hydrogen-fueled buses on city roads by 2022 and has poured billions into cleaning up the nation's air.

South Korea ranks near the bottom of the 2019 Climate Change Performance Index, at number 57 out of 60 countries measured.

"We students and teachers can do small things like use less energy, but if the policy is not changed, nothing else will change," Lee Sun-jung said. "We hope lawmakers who can change climate policies begin to act on this issue."

World News // 11 hours ago
K-pop's Seungri charged with deploying gangsters at bar
Jan. 15 (UPI) -- A South Korean celebrity who owned a nightclub in Seoul that shuttered after multiple rape incidents was indicted for mobilizing gang members.

World News // 12 hours ago
Russia says it will follow U.S. in abandoning Open Skies Treaty
Jan. 15 (UPI) -- The Russian government announced Friday that it will withdraw from the Open Skies Treaty -- a 30-year-old pact among 34 nations that permits unarmed surveillance flights -- after the United States dropped out last fall.

World News // 13 hours ago
Dutch gov't collapses under weight of childcare repayment scandal
Jan. 15 (UPI) -- A major scandal in the Netherlands -- which wrongly accused parents of fraud related to payments for childcare benefits, and forced them to repay that money -- led to the collapse of the entire Dutch government on Friday

World News // 16 hours ago
Indonesia hunts for survivors after deadly quake in Sulawesi
Jan. 15 (UPI) -- A search for survivors is underway in Indonesia after a 6.2-magnitude earthquake hit the country's Sulawesi Island. 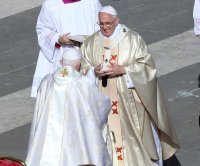