Venezuelan opposition deputy Edgar Zambrano speaks to reporters Tuesday after he was released from jail after four months. Photo by EPA-EFE

Sept. 18 (UPI) -- More than four months after he was arrested and charged with treason, Venezuelan opposition leader and lawmaker Edgar Zambrano has been freed from jail.

Zambrano, a deputy to chief opposition leader Juan Guaido, was arrested in May over what the government called a failed uprising against President Nicolas Maduro, plotted by Guaido. Zambrano's case is part of the political crisis in Venezuela this year, in which Guaido has claimed the title of interim president and Maduro has rejected calls for a new election. Opposition members have said Maduro's presidency is illegitimate based on voting irregularities and potential fraud.

Tuesday, Zambrano denounced Maduro upon his release, and demanded four other political prisoners also be freed.

"This [was] practically a kidnapping," the 64-year-old Zambrano said. "I was captured in the middle of the night, by men who never identified themselves, with no order for capture, with no order from the republic, and in contravention of my political rights.

"Having been released, I call for and demand the release of political prisoners, civilian and military. I demand democracy for my country."

"This shows the absolute disposition of President Nicolas Maduro to keep all the doors open," Rodriguez said.

Guaido rejected the notion that Zambrano's release was a benevolent act by Maduro.

"The liberation of Zambrano and political prisoners is a victory of citizen and international pressure, and the Bachelet report -- not a 'kind gesture' from the dictatorship," Guaido tweeted.

The Venezuelan National Assembly voted Tuesday to reaffirm Guaido's leadership, which is officially recognized by the United States and other Western nations.

Nearly 800 people have been arrested since the start of June, High Commissioner for Human Rights Michelle Bachelet has said.

World News // 18 hours ago
Mainland China on high alert after COVID-19 outbreak near N. Korea
Jan. 17 (UPI) -- Mainland China is on high alert for another coronavirus outbreak wave, six days after the one-year anniversary of the first fatality in Wuhan that has surpassed 2 million fatalities and 95 million cases worldwide.

World News // 19 hours ago
Alexei Navalny detained upon returning to Russia after treatment for poisoning
Jan. 17 (UPI) -- Russian opposition leader Alexei Navalny was detained as he returned to Moscow on Sunday after recovering from being poisoned. 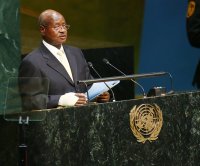