Tropical Storm Gabrielle forecast to intensify a little before weakening 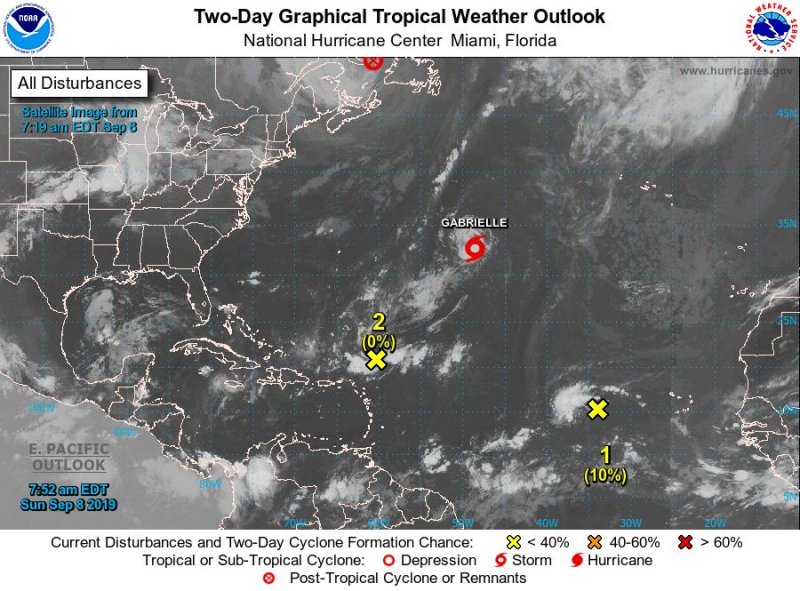 Sept. 8 (UPI) -- Tropical storm Gabrielle gained strength overnight and is forecast to turn northward over the central Atlantic later Sunday before weakening as no threat to land, the National Hurricane Center said.

In its 5 p.m. EDT update, the NHC said the center of Tropical Storm Gabrielle was about 1,250 miles west of the Azores. It had maximum sustained winds at 65 mph and was traveling northwest at 16 mph. Gabrielle will become a hurricane if it reaches 74 mph wind speeds.

The NHC said Gabrielle, which is showing evidence of an inner core trying to form, could strengthen a little more Sunday while it remains over warm water and in generally favorable atmospheric conditions.

"However, the combined influences of increasing southerly shear and cooler waters should end the chances of intensification on Monday," NHC forecaster John Cangialosi said in a discussion.

Gabrielle is the seventh named storm of the season, following Tropical Storm Fernand in the Gulf of Mexico.

As post-tropical systems, Dorian and Gabrielle will deliver a one-two punch of rain and gusty winds to Britain.

After reaching peak strength while battering the Bahamas and brushing the eastern United States, Dorian will cross the pond with a dose of rain that will start as early as Tuesday. By the time it reaches its destination, Dorian will no longer be a hurricane.

After stirring up the waters of the Atlantic, Gabrielle will be the next tropical system to affect the United Kingdom.

On Thursday, Gabrielle will pass through the waters of the North Atlantic Ocean between Iceland and northern Scotland.

Late Wednesday night, increasingly breezy conditions can be expected in Northern Ireland and Scotland, with the strongest winds expected during the day on Thursday.

Wind gusts in these areas during the day on Thursday could reach 50 mph, especially on hill tops and windward-facing coasts. With gusts reaching this magnitude, several impacts like tree damage, power outages and transportation delays are all possible.

World News // 3 hours ago
COVID-19 subsides in Britain with 82 new deaths, lockdown to ease
March 7 (UPI) -- The pandemic is diminishing in Britain, including an increase of 82 deaths Sunday, after a peak of more than 1,800 two months ago with restrictions to be reduced and vaccinations ramped up, much like elsewhere in Europe.