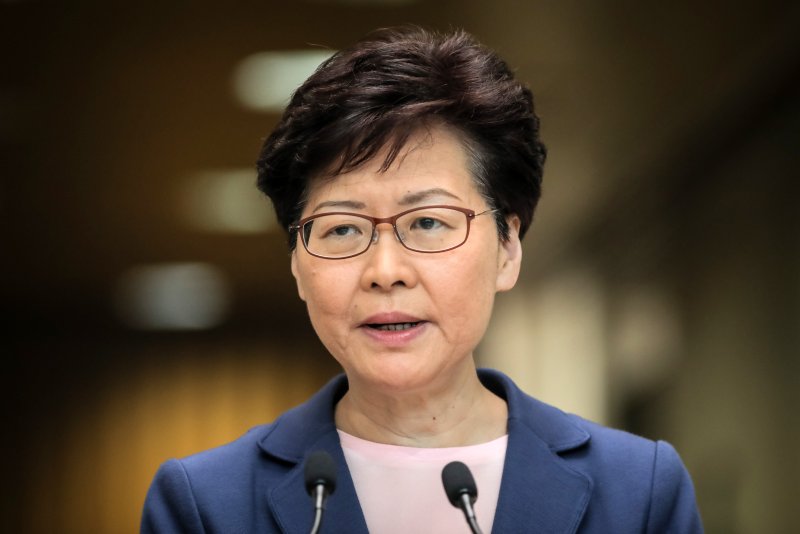 Sept. 5 (UPI) -- Hong Kong's embattled leader Carrie Lam said on Thursday that the decision to formally withdraw the controversial extradition bill that has led to months of violent protests in the city was her own initiative and did not come from Beijing.

Speaking to reporters one day after a surprise announcement on Wednesday, Lam said that the Chinese government "respected" and "supported" her moves to first suspend the bill in June and then withdraw it this week.

"The decision is one of the Hong Kong SAR government," she said, using the city's full title as a Special Administrative Region of China.

"Throughout the whole process the [Chinese] Central People's Government took the position that they understood why we had to do it, they respected my view and supported me all the way," Lam said.

The extradition bill, first proposed in April, would have made it easier to send fugitive criminal suspects to China for trial, where an opaque and politically controlled justice system operates.

Its announcement sparked a months-long series of demonstrations and police crackdowns that have deeply shaken the city and shocked the world.

Beijing has said the protests show "signs of terrorism" and has vowed not to let things get out of control, while Chinese state-run media has shown videos of armored troop carriers at the border.

Lam's Wednesday decision to withdraw the bill came after one of the most violent weekends of protests all summer, which saw demonstrators lighting fires and tossing petrol bombs and bricks and police retaliating with water cannons and tear gas.

However, many of Hong Kong's leading activists said that Lam's move has come too late to stem the tide of protests, which have evolved into a movement that seeks to hold onto autonomy in legal and political affairs under the "one country, two systems" arrangement with Beijing that has been in place since 1997.

The protesters have put forth a set of five demands which include not just the withdrawal of the extradition bill, but an investigation into police actions during the demonstrations, amnesty for arrested protesters and direct elections to choose the city's politicians.

RELATED Hong Kong protesters shut down transport to and from airport

Joshua Wong, a prominent Hong Kong student activist and politician, said on Twitter Wednesday that Lam's move was "too little and too late."

Wong tweeted that Lam's "repeated failure in understanding the situation has made this announcement completely out of touch. She needs to address ALL Five Demands."

Nathan Law, the founder of the Demosisto pro-democracy political party, tweeted that the bill's withdrawal would not slow down the protest movement.

"We fight for democracy and autonomy," he wrote. "The movement will continue."

"Hong Kong Chief Executive Carrie Lam's long-overdue withdrawal of the extradition bill is a welcome but insufficient step after the government's violent response to the Hong Kong people's desire to protect their democratic freedoms," Rubio said.

Lam, who many in Hong Kong consider a puppet of Beijing, countered on Thursday that she has outlined a series of "four actions," including adding two new members to Hong Kong's Independent Police Complaints Commission to investigate police violence, that will facilitate dialogue.

"Taken together, I hope they will provide a basis for a dialogue and help Hong Kong break the current impasse," she said Thursday.

World News // 7 hours ago
Baby has surgery after parents lose fight to block 'vaccinated blood' transfusions
Dec. 9 (UPI) -- New Zealand's 6-month-old "Baby W" is recovering in a hospital after a successful life-saving surgery was performed against the wishes of his parents, who wanted to block the use of blood from vaccinated donors.

World News // 8 hours ago
France will distribute free condoms to fight rising STD rates
Dec. 9 (UPI) -- France will begin making condoms available for free to people over 18 and under 26 starting next month, in an effort to reduce the spread of sexually transmitted diseases.