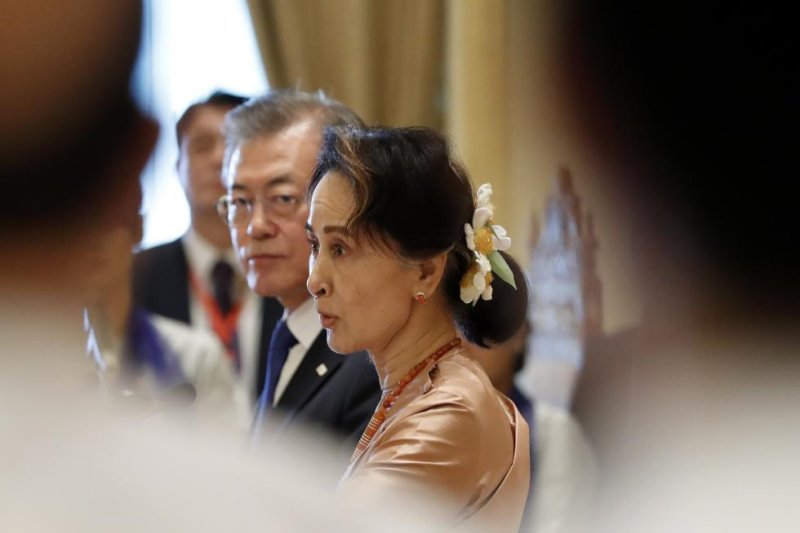 Moon, who is on a tour of Southeast Asian nations to reaffirm friendly ties and bolster trade, met with Myanmar's de facto head of state, South Korean news services News 1 and Newsis reported.

Suu Kyi, who has been accused of mishandling the crisis of the Rohingya in Myanmar and doing nothing amid human rights abuses, agreed the "peace process" in both countries is the top priority during her meeting with Moon.

South Korea has sought the assistance of ASEAN countries in providing a platform for dialogue between the two Koreas -- part of Moon's New Southern Policy.

ASEAN member states have stepped up their involvement. In 2018, Singapore spent $15 million to host U.S. President Donald Trump and Kim Jong Un. Vietnam has offered its model of economic reform to Pyongyang.

The South Korean leader did not raise the issue of Myanmar's human rights abuses or the Rohingya refugee crisis during the meeting, saying instead he hoped Myanmar achieves "national harmony and integration through progress in peace."

Myanmar is extending a decision to exempt South Koreans from visas for one more year.

The program has culminated in a 84 percent increase in South Korean inbound tourism to Myanmar in 2018 and 2019.

Moon has agreed to increase Seoul's economic development cooperation fund to Myanmar to $1 billion. South Korean firms, including state-run LH, is involved in a joint construction project in Myanmar, the Korea Times reported.