Aug. 22 (UPI) -- The South Korean government's decision to terminate a military intelligence-sharing agreement with Japan is being met with mixed reactions in Seoul.

In its statement made public Thursday afternoon, South Korea's presidential Blue House said maintaining the agreement, known as Japan-Korea GSOMIA, is not in the national interest.

South Korea said in the statement Japan's decision to remove Korea from its "white list" of preferred trading partners and initiate trade restrictions were reasons for the decision to suspend cooperation on security.

"The rationale was that a national security problem had arisen due to a breach of trust, yet no concrete evidence to support those allegations was presented," by Japan, Seoul said.

"Under these circumstances, the Government of the Republic of Korea decided that maintaining this Agreement, which was signed to facilitate the exchange of sensitive military information, does not serve our national interest."

Lee In-young, a South Korean lawmaker with the ruling Democratic Party, said the decision reflects the need to uphold national interest, the "will of the people," and a "changing security environment."

Opposition party conservatives of the Liberty Korea Party are condemning the termination of GSOMIA, and accused the administration of President Moon Jae-in of trying to create a distraction amid a corruption scandal centered on his former aide, Cho Kuk, Money Today reported.

The news of the cancellation may have taken Japan by surprise, according to South Korean television network MBC.

Local television channels in Japan suspended regular programming to break the news of the agreement's termination, the report said.

World News // 7 hours ago
North Korea suggests it may resume ICBM, nuclear tests
SEOUL, Jan. 20 (UPI) -- North Korean leader Kim Jong Un said it was time to "examine the issue of restarting all temporally suspended activities" in an apparent reference to lifting its moratorium on long-range missile and nuclear weapons. 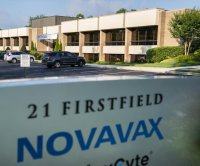 World News // 19 hours ago
Seniors join climate fight in South Korea, redress for 'dark side' of economic boom
SEOUL, Jan. 19 (UPI) -- Dozens of senior citizens took to the snowy streets of Seoul on Wednesday to lend their voices to a climate movement that is typically the domain of much younger activists.
Advertisement