Twitter and Facebook said Monday that China has been using their services in an attempt to discredit and vilify pro-democracy protesters in Hong Kong. Photo by Thomas Maresca/UPI | License Photo

Aug. 19 (UPI) -- China has been mobilizing fake social media accounts to spread false information online about the ongoing protests in Hong Kong, both Facebook and Twitter said Monday, prompting the Internet companies to purge China-backed accounts from their platforms.

Social media accounts originating in China and controlled by Chinese officials have been conducting a coordinated campaign to discredit and undermine pro-democracy protesters in Hong Kong as criminals, terrorists and thugs, the companies said, adding that many of the accounts possed as news organizations to spread their disinformation.

"Overall, these accounts were deliberately and specifically attempting to sow political discord in Hong Kong, Including undermining the legitimacy and political positions of the protest movement on the ground," Twitter said in a statement. "Based on our intensive investigations, we have reliable evidence to support that it is a coordinated state-backed operation."

As evidence, Twitter said it discovered "large clusters of accounts" working in unison to amplify messages against the Hong Kong protesters. And while Twitter is banned in the Asian country, some of the malicious accounts accessed the platform by specific unblocked IP addresses in the Chinese mainland.

Twitter said it removed 936 accounts while proactively suspending "a larger, spammy network" of approximately 200,000 more, many of which were created after the company became aware of the campaign.

Facebook said it was tipped off to the campaign by Twitter and following its own internal investigation, discovered seven Pages, three Groups and five Facebook accounts in China focused on discrediting the Hong Kong protests.

Facebook said 15,500 accounts followed one or more of the discontinued pages, which are public profiles of businesses or brands, and about 2,200 accounts joined at least one of the now-discontinued groups, which are similar to community forums.

"The individuals behind this campaign engaged in a number of deceptive tactics, including the use of fake accounts ... to manage Pages posing as news organizations, post in Groups, disseminate their content and also drive people to off-platform news sites," Facebook said in a separate release. "They frequently posted about local political news and issues including topics like the ongoing protests in Hong Kong."

On Tuesday, China's Foreign Ministry Spokesman Geng Shuang said he wasn't aware that the social media companies had suspended accounts but that they won't be able to silence all Chinese who disagree with the Hong Kong protesters.

He made no comment on the accounts being connected to Chinese officials, which Facebook said it was able to corroborate despite attempts at concealing the account holders' identities.

Facebook said it was downing the Pages, Groups and accounts not based on the context posted but on the behavior of the account holders.

"As with all of these takedowns, the people behind this activity coordinated with one another and used fake accounts to misrepresent themselves, and that was the basis for the action," Facebook said.

Both companies said they will continue to stay vigilant against such behavior in the future.

World News // 15 hours ago
Airstrikes in Yemen leave dozens dead, nationwide Internet outage
Jan. 21 (UPI) -- More than 70 people were killed and hundreds of others injured during Saudi-led airstrikes in northern Yemen, according to officials on Friday.

World News // 15 hours ago
Hezbollah faces rising dissent, efforts to end Iran's 'occupation' of Lebanon
BEIRUT, Lebanon, Jan. 21 (UPI) -- Lebanon's financial collapse, which has pushed many into poverty, has also seen growing anger against Hezbollah, with more voices openly blaming it for the ongoing crisis and for its allegiance to Iran.

World News // 22 hours ago
Only commitment in U.S., Russia meeting about Ukraine is to keep talking
Jan. 21 (UPI) -- Secretary of State Antony Blinken and Russian Foreign Minister Sergey Lavrov ended a 90-minute meeting in Geneva Friday without an agreement on concerns over Ukraine but committed to continue talking. 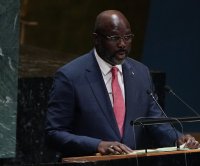