A Ural Airlines Airbus A-321 is seen after crash landing in a cornfield Thursday near Moscow, Russia, after hitting a flock of seagulls. Photo by Sergei Ilnitsky/EPA-EFE

A Ural Airlines Airbus A-321 is seen after crash landing in a cornfield Thursday near Moscow, Russia, after hitting a flock of seagulls. Photo by Russian Investigative Committee/EPA/EFE

Aug. 15 (UPI) -- A fully loaded Russian passenger airliner was forced to land in a cornfield near Moscow Thursday after striking a flock of birds, officials said.

The Ural Airlines Airbus A-321 carrying 234 people descended into the cornfield without landing gear after the bird strike. A number of people were hurt in the crash landing in Ramensk, located about 25 miles southeast of the Russian capital.

The plane had just taken off from Moscow and was headed for Crimea when several birds were sucked into the plane's two engines, which caught fire. The jetliner crash landed about a half-mile from Moscow's Zhukovsky International Airport. One passenger recorded the landing on their cellphone.

"Today is a really good day," Kremlin spokesman Dmitry Peskov said. "Let's congratulate each other that 234 passengers and seven crew members are alive. Let us offer our wishes for a speedy recovery to those who were injured and congratulate the heroic pilots for saving people's lives and landing the plane."

The scale of the bird strike was "quite rare," an airline spokesman said.

"Then the lights started flashing and there was a burning smell," Galin said. "The plane landed and we all ran out."

Russia's Investigative Committee and the Interstate Aviation Committee will investigate the accident.

World News // 11 hours ago
British fugitive Mark Liscott captured in Amsterdam
July 1 (UPI) -- One of Britain's most notorious fugitives who had been on the run for almost eight years was arrested by local authorities in the Netherlands last month, Amsterdam police said Wednesday. 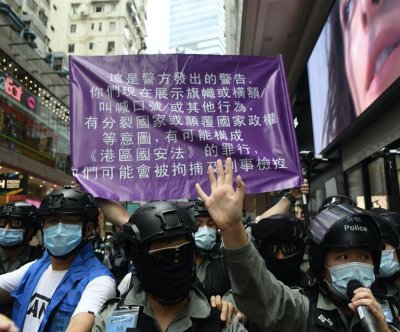 World News // 21 hours ago
Hong Kong: Police make first arrests under new national security law
July 1 (UPI) -- Police in Hong Kong said Wednesday they have arrested a man for holding a black flag calling for the city's independence from China, making him the first person to be detained under a controversial new law.

World News // 22 hours ago
Defectors say sending information into North Korea is vital
SEOUL, July1 (UPI) -- North Korean defectors who send leaflets and other information across the border say the practice is a vital step toward forcing change in the repressive country.