Aug. 12 (UPI) -- A North Korean committee claiming to represent the rights of victims of forced wartime labor and former comfort women delivered a "letter of solidarity" to a South Korean group of activists.

The Korean Council for the Women Drafted for Military Sexual Slavery by Japan said Monday that Pyongyang's Committee on Sex Slave Victims of the Japanese Military and Forced Labor Victims had sent the letter ahead of a major anniversary, Yonhap reported Monday.

Wednesday marks the 1,400th rally of the weekly demonstrations outside the Japanese Embassy in Seoul. South Korean protests against the Japanese government for trade restrictions, and Tokyo's opposition to issuing a formal apology to former comfort women forced to serve in wartime brothels, have been growing since July.

In its letter to the Korean Council in South Korea, the North Korean committee said Japan is "insulting the victims" of sex and war crimes.

The North Koreans also said Japan has not recognized its war crimes, ahead of the 74th anniversary of the end of World War II, which will be observed on Thursday.

Japan is "pulling out the knife of economic aggression in response to demands for compensation from forced laborers," the North Korean committee said in its letter.

South Korean activists are making the North Korean letter public at a time when local academics continue to investigate the history of comfort women stations that began to appear across Asia as Japan expanded its dominion over countries during World War II.

The evidence shows Japanese forces administered the stations and brought in women registered as "nurses," according to the report.

World News // 40 minutes ago
Ex-South Korea dictator receives suspended sentence for libel
Nov. 30 (UPI) -- A South Korean dictator in power during the 1980 Gwangju Uprising has been sentenced to prison for eight months for defaming a Roman Catholic priest.

World News // 1 hour ago
4 officers charged in Paris beating
Nov. 30 (UPI) -- Four French police officers connected with the brutal beating of a Black music producer for not wearing a face mask have been charged in connection with the incident.

World News // 7 hours ago
Australia demands China apologize for 'repugnant' Twitter post
Nov. 29 (UPI) -- Australia has demanded China apologize for posting a "repugnant" and "offensive" doctored image on Twitter of an Australian soldier threatening the life of an Afghan child as relations between the countries fray. 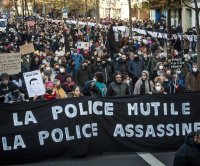