A thermometer in Arnhem, the Netherlands, reads a temperature of over 40 degrees Celsius -- or 104 degrees Fahrenheit on July 25. Photo by Vincent Jannink/EPA-EFE

The Dutch Center for Statistics said about 400 people died amid the above-normal heat, which set multiple weather records for the month of July.

The heat wave that ran from July 22-27 pushed temperatures as high as 104 degrees for the first time since they were first tracked in 1901.

The Oost-Nederland region suffered the brunt of the deaths, Statistics Netherlands said. The data show residents 80 and over were most affected -- accounting for about three quarters of all related deaths.

Marcel Olde Rikkert, head of the Center of Excellence for Geriatrics, said seniors are often not strong enough to withstand such sustained heat.

"It was to be expected because the heat was intense," Rikkert told Nederlandse Omroep Stichting. "It caused me problems, so imagine how it was for people with little physical strength."

Volkskrant reported a Dutch preparedness plan -- which instructs citizens how to respond to extreme heat -- may have saved countless lives last month.

World News // 5 hours ago
South Korea prosecutors drop charges in Sewol ferry case
Jan. 19 (UPI) -- South Korean prosecutors said they found no evidence that the highest office in the nation attempted to obstruct investigations into the sinking of the Sewol ferry. 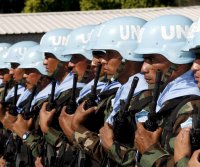 World News // 8 hours ago
North Korea approves smaller increase in 2021 budget, reports say
Jan. 19 (UPI) -- North Korea's budget increased at a lower rate for 2021 than last year at a session of the Supreme People's Assembly on Sunday, according to Seoul's unification ministry.