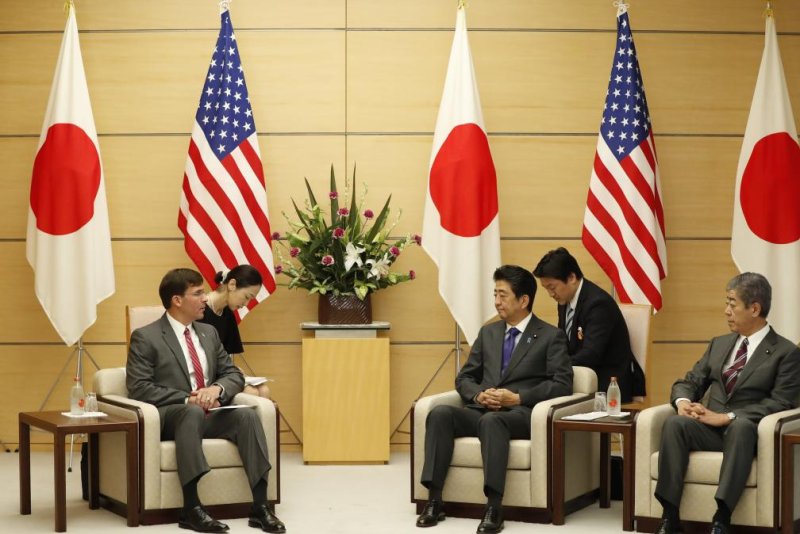 Aug. 7 (UPI) -- U.S. Secretary of Defense Mark Esper expressed deep concern regarding North Korea's latest tests of what the regime described as a new type of tactical guided missile during his meeting with Japanese Prime Minister Shinzo Abe in Tokyo.

Esper, who is visiting Japan for the first time since his appointment in July, met with Abe and Japanese Defense Minister Takeshi Iwaya to reaffirm the U.S.-Japan alliance, the Yomiuri Shimbun and Kyodo News reported Wednesday.

Esper also raised concerns about China's militarization of the South China Sea, describing Chinese activities, including the activation of military bases on disputed islands, as a threat to the international rule of law, according to the Japanese press reports.

The U.S. defense secretary described Pyongyang's provocations, including its latest test of missiles on Tuesday, as a major concern, breaking from President Donald Trump.

Trump had said last week North Korea's tests of short-range ballistic missiles are not a violation of Kim Jong Un's agreements with the United States.

Esper called on Japan to work together toward complete denuclearization, adding the Trump administration continues to support a resolution to the issue of Japanese abductees to North Korea.

Japanese Prime Minister Shinzo Abe said he would cooperate with the United States to realize a "free and open Indo-Pacific," referring to a Trump administration strategy toward protecting interests in the region amid Chinese expansion.

Esper did not raise the issue of Japanese participation in the Strait of Hormuz, however.

On Tuesday, Esper told reporters, "Any and every country that has an interest in freedom of navigation and freedom of commerce needs to really consider [being] involved in this type of monitoring of the [Hormuz] strait."

Japan may be refraining from joining the coalition out of concern for its bilateral relation with Iran, according to reports.

World News // 44 minutes ago
Turkey agrees to let Sweden and Finland join NATO
June 28 (UPI) -- NATO Secretary-General Jens Stoltenberg said Tuesday that the military alliance has reached a deal to admit Sweden and Finland after Turkey, a previous holdout, agreed to it.

World News // 2 hours ago
Russia sanctions first lady Jill Biden, daughter among 25 Americans
June 28 (UPI) -- First Lady Jill Biden and her daughter Ashley Biden are two of the 25 Americans covered by Russia's latest round of sanctions, barring them from entering the country, the Russian Foreign Ministry said in a statement.

World News // 4 hours ago
German court sentences 101-year-old ex-guard to prison for aiding murders at Nazi camp
June 28 (UPI) -- A 101-year-old German man was sentenced to five years in prison on Tuesday after being convicted of aiding thousands of deaths as a guard in a Nazi concentration camp during World War II.

World News // 8 hours ago
Biden arrives in Spain to attend NATO summit, pledges billions for food security to finish G7
June 28 (UPI) -- President Joe Biden attended the final session of the G7 summit in Germany on Tuesday before he left for Spain to take part in a NATO Summit there, which will focus on Russia's war in Ukraine and NATO's future plans.

World News // 9 hours ago
Death toll in Ukraine mall attack rises to 18; Russia increases targets in east and south
June 28 (UPI) -- A commander told officials on Tuesday that Russia has intensified attacks in the eastern and southern parts of the country as crews continue to search for survivors of an attack on a shopping mall in central Ukraine.