Teams rescue all 700 aboard train amid India flooding

Indian people use an auto-rickshaw in the flooded street near the site of rescue operation carried out by National Disaster Response Force to rescue passengers stranded inside a train after it got stuck due to heavy rain near Vangani, on the outskirts of Mumbai, India, Saturday. Photo by Divyakant Solanki/EPA-EFE

July 27 (UPI) -- Rescue teams on Sunday evacuated all 700 aboard a train in India as heavy rains flooded the tracks.

The Mumbai-Kohlapur Mahalaxmi Express was stalled since 3 a.m. about 62 miles away from Mumbai, a passenger on board told India Today.

"Kudos to the rescue teams for their exemplary effort," Shah said.

Seven Navy teams and two Indian Air Force helicopters were deployed, along with other military forces in the rescue effort.

The Navy deployed eight rescue teams within 40 minutes of the first call.

"Women and children were evacuated first including nine pregnant women, after that elderly people were evacuated and finally male passengers," Director General Satya Narayan Pradhan of the National Disaster Response Force said. "Operation went on for around eight hours."

Ambulances with 37 doctors and gynecologist were deployed, according to the Chief Minister's Office.

Rescued passengers were provided food at Sahaydri Hotel in Badlapur and a special train was scheduled to leave with 19 coaches from Kalyan to Kohalpur with the passengers of the stalled train.

Earlier in the morning, the Navy spokesperson tweeted about the flooding and preparation for the disaster.

"Following the incessant rains over the last 24 hours in Mumbai and adjoining areas, eight flood rescue teams from the Indian Navy including three diving teams have been mobilized with rescue material, inflatable boats and life jackets," the Navy spokesperson tweeted.

The city of Pune in the Indian state of Maharashtra has seen "heaviest downpours" in "recent times," over the last 24 hours due to active monsoon surge over the west coast of Maharashtra, Skymet weather service reported. Moderate to heavy rains are expected to continue throughout the weekend and Monday and start clearing by Tuesday. 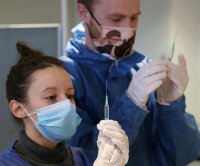 World News // 23 hours ago
UAE becomes one of few Middle East nations to change work week to Monday-Friday
Dec. 7 (UPI) -- The United Arab Emirates on Tuesday formally announced that it's shifting its official work week from Sunday to Thursday to Monday to Friday, becoming one of the few Middle Eastern nations to do so.