The government figures showed China's gross domestic product grew at 6.2 percent for the quarter that ended in June -- the slowest since 1992.

"The Chinese economy is still in a complex and grave situation," the National Bureau of Statistics said in a statement. "Global growth slowed and external uncertainties are on the rise."

Analysts attributed the slowdown to the trade conflict between China and the United States, which is in its second year. They said they expect the Chinese economy to continue to see "downward pressure" in the second half of this year, even after the resumption of talks between Beijing and Washington.

Sales of Apple products fell 21.5 percent in the greater China region, a $10.2 billion hit for the technology company.

Weak second-quarter growth "may cause wobbles in the rest of Asia if the slowdown ignites worries of trade tensions," analyst Vishnu Varathan of Mizuho Bank told CNBC. 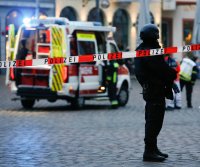 World News // 17 hours ago
Driver rams into pedestrians in western Germany; at least 5 dead
Dec. 1 (UPI) -- At least five people were killed Tuesday in west-central Germany when a vehicle veered into a pedestrian zone and began ramming people, police said.

World News // 14 hours ago
Cryptocurrency linked to Facebook changes name amid backlash
Dec. 1 (UPI) -- The Libra cryptocurrency project Facebook launched in 2019 changed its name Tuesday to get a fresh start.

World News // 15 hours ago
Remains of 36 more Korean War service members identified over year period
Dec. 1 (UPI) -- Dozens of U.S. soldiers who went missing during the Korean War have been found and identified in the past year, but the search has been slowed by the coronavirus pandemic.