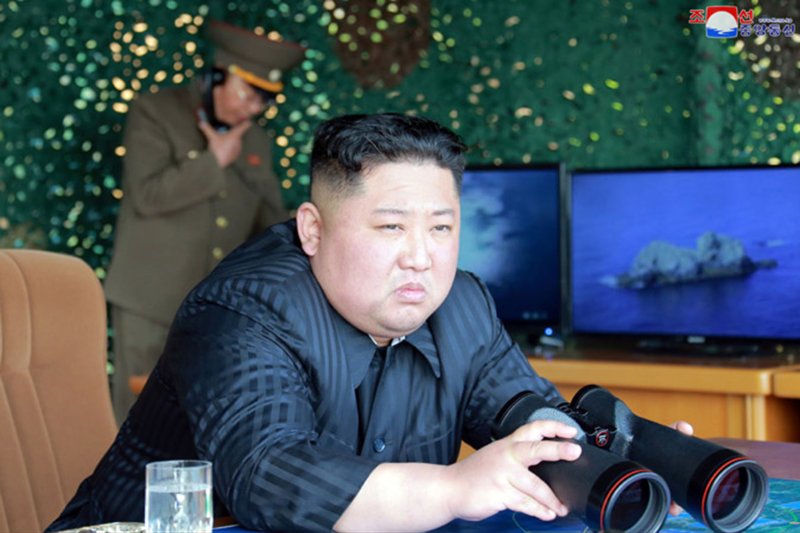 The North Korean constitution was revised in April and now states that Kim Jong Un not only serves as the country's supreme leader but also represents it. Photo by KCNA/UPI | License Photo

SEOUL, July 11 (UPI) -- North Korea has revised its constitution to stipulate that leader Kim Jong Un is the official head of state, according to a state media outlet.

The new constitution, revised in April's Supreme People's Assembly session, states that the chairman of the State Affairs Commission, the communist state's highest seat of power, serves as its supreme leader who "represents the country," according to Naenara, a North Korean propaganda website.

Kim rules the North as chairman of the State Affairs Commission.

The website unveiled the full text of the new constitution.

The previous constitution only stated that the chairman of the SAC served as supreme leader. Under the previous version, it was the president of the Presidium of the SPA who represents the country as nominal head of state.

Speculation has arisen that the North could push for revision of its constitution to make Kim the official head of state after the leader was not on the ballot in national elections in March to select new deputies to the 14th SPA.

It was the first time that a North Korean leader's name did not appear on the ballot in the elections. Nor was his name among the newly elected deputies.

Kim was re-elected as chairman of the SAC in April. Pyongyang's state media earlier addressed him by using a new title of "supreme representative," spawning speculation over a possible constitutional revision to expand Kim's power.

In April, Choe Ryong Hae, considered one of the closest aides to the leader, was elected to replace Kim Yong Nam as the president of the Presidium of the SPA.

World News // 38 minutes ago
British chancellor unveils blueprint to turn around economy
LONDON, Jan. 27 (UPI) -- British Chancellor Jeremy Hunt laid out his vision Friday to restore stability to an economy reeling from hammer blows dealt by the pandemic, the financial crisis and the international energy crisis.

World News // 7 hours ago
ICC will reopen investigation into Philippines' deadly drug war
Jan. 27 (UPI) -- The International Criminal Court announced that it will resume its investigation into alleged crimes against humanity in the Philippines under former President Rodrigo Duterte's war on drugs.

World News // 22 hours ago
11 killed as Russia launches new missile strikes in Ukraine
Jan. 26 (UPI) -- Russia launched 55 missiles against Ukraine on Thursday, 47 of which were shot down by air defense, according to the Ukrainian Ministry of Defense. A total of 11 people were killed by strikes, emergency services said.

World News // 1 day ago
Toyota CEO Akio Toyoda to step down, move to board position
Jan. 26 (UPI) -- Toyota CEO and President Akio Toyoda will leave those roles April 1 and become chairman of the board. Toyota Chief Branding Officer Koji Sato will be the new CEO.
Advertisement