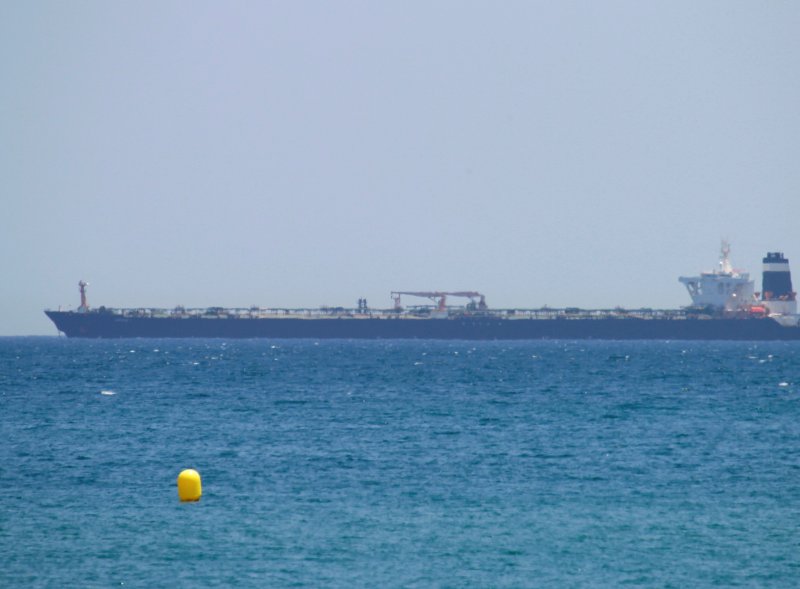 Iran's Iranian military unsuccessful attempted to seize a British tanker after its president, Hassan Rouhani, warned Britain there would be consequences for its seizure last week of Grace 1, which was shipping Persian oil to Syria. Photo by Ragel. A. Carrasco/EPA-EFE

July 11 (UPI) -- Hours after Iran warned Britain Wednesday there would be consequences for seizing one of its oil tankers on route to Syria, five Iranian military gunboats unsuccessfully tried to detain a British oil tanker in the Persian Gulf, U.S. defense officials said.

The British Heritage tanker was approached Wednesday by Iranian Islamic Revolutionary Guard Corps boats in the Strait of Hormuz and ordered to enter Iranian territorial waters, the officials said.

The British warship, HMS Montrose, was less than five miles behind the tanker when it was approached and threatened to open fire if the Iranian gunboats did not disengage, which they did.

"Threats to international freedom of navigation require an international solution," he said. "The world economy depends on the free flow of commerce, and it is incumbent on all nations to protect and preserve this linchpin of global prosperity."

The incident follows Iranian President Hassan Rouhani warning Britain that there would be "consequences" for having seized a tanker shipping Persian oil last week off Gibraltar on its way to Syria.

"I remind this to the Britons," Rouhani said Wednesday during a government meeting. "You are the ones initiating insecurity, and will come to realize its consequences in the future."

The Grace 1 was detained in by the British Royal Navy July 4 on reasonable grounds to suspect it was violating European Union sanctions.

The attempted seizure Wednesday is the latest conflict to occur in the Persian Gulf following attacks on several tankers in the Strait of Hormuz, where some 20 percent of the world's oil transits, in the past two months.

The United States has repeatedly blamed Iran for those attacks while Iran has denied the allegations.

The Strait of Hormuz is also near the location where Islamic Revolution Guards Corps shot down a U.S. drone, though both sides argue over whether it was actually downed in the Middle Eastern country's territory. Iran claims the drone was in its airspace while the United States says it was over international waters.

The attempted seizure comes as the United States has accused Iran of "nuclear extortion," threatening to slap the country with further sanctions for surpassing a stockpile limit of enriched uranium established in the 2015 multinational accord aimed at preventing Iran from obtaining a nuclear weapon.

The International Atomic Energy Agency in Vienna said Wednesday its 35-nation Board of Governors met to discuss issues with Iran at the request of a member state.

During the meeting, which was called by the United States, U.S. ambassador Jackie Wolcott said "there is no credible reason for Iran to expand its nuclear program, and there is no way to read this as anything other than a crude and transparent attempt to extort payments from the international community."

The only path to sanctions relief for Iran will be through negotiations, "not nuclear extortion," she said.

The board said in its resolution from Wednesday's meeting it was "deeply concerned" that Iran had exceeded the stockpile limit of uranium enriched to 3.67 percent and had started enriching uranium above that ceiling, stressing that Iran should adhere to all aspects of the deal.

"We urge Iran to reverse these steps and to return to full JCPOA compliance without delay," the IAEA Board of Governors said, referring to the accord by its initialism.

Iran has long been secretly "enriching," in total violation of the terrible 150 Billion Dollar deal made by John Kerry and the Obama Administration. Remember, that deal was to expire in a short number of years. Sanctions will soon be increased, substantially!— Donald J. Trump (@realDonaldTrump) July 10, 2019

Tensions between the two countries have flared since last May when Trump pulled out of that nuclear accord. On May 8, Iran said it would no longer be adhering to certain aspects of the deal and would start stockpiling enriched uranium.

World News // 6 minutes ago
South Korean presidential contender egged in face during market visit
March 5 (UPI) -- A South Korean politician widely believed to be a contender for the presidency in 2022 was egged in the face on Friday, during a visit to the city of Chuncheon.