Pyongyang's state-controlled news agency KCNA reported the drought that began in the spring could have long-term impact.

"Most parts of the western coast, and the central inland, are experiencing high temperatures," KCNA said. "Serious drought conditions are ongoing."

State media said the area most seriously hit includes South Hwanghae Province, known as the rice basket of the country.

Korean Workers' Party newspaper Rodong Sinmun said Sunday if drought causes further damage there will be no harvest in the upcoming season.

North Korea's meteorological administration said rainfall in May was 37 to 46.3 percent of the average. Weather conditions are increasing concerns of a food shortage in the country, according to Yonhap news agency.

RELATED Failed government is the problem, not liberalism

International organizations, including the Group on Earth Observations Global Agricultural Monitoring Initiative, or GEOGLAM, and the Food and Agriculture Organization, have forecast drought in North Korea will severely impact crop yield this year

North Korea also requested assistance from the International Federation of the Red Cross in February. United Nations agencies recently said ordinary North Koreans who rely on the state for survival are coping with reduced food rations. Rations per person were reduced to 300 grams a day, a decrease from a previous ration of 380 grams per day.

South Korea has pledged 50,000 tons of food aid to the North. 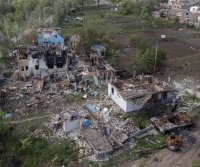 World News // 2 minutes ago
Most remaining troops surrender at Ukraine steel plant in step toward Russian victory
May 18 (UPI) -- Russia's military said on Wednesday that hundreds of Ukrainian troops who have been holed up for weeks at the steel plant in Mariupol have surrendered and been taken into custody.

World News // 37 minutes ago
Inflation rises in Britain by 9%; steepest surge in 40 years
May 18 (UPI) -- Like the United States, Britain is dealing with its highest Inflation in about 40 years -- due largely to rising energy prices that are being disrupted by Russia's war in Ukraine. 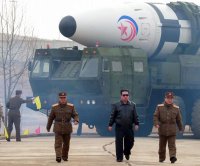