Afghan security officials secure the scene of a suicide bomb blast near a governmental institution in downtown Kabul, Afghanistan on Monday. Photo by Hedayatullah Amid/EPA-EFE

July 1 (UPI) -- Dozens of Afghans were killed and more than 100 were wounded, including many children, in a car bomb explosion in the Afghan capital on Monday.

Authorities said almost 50 children were among the 105 injured in the blast, for which the Taliban claimed responsibility, Tolo News reported.

The Taliban said in a statement that it had killed "dozens of [Department of Justice] officers and soldiers" in the attack.

Interior Ministry spokesman Nusrat Rahimi said the car bomb was detonated in Kabul targeting the Ministry of Defense's logistics and engineering center, located in a township where more than 100 families reside.

The Afghanistan Football Federation, which is in the vicinity of the blast, said it caused "serious injury" to players and staff. Some, it said, were cut with glass as a result of the explosion.

Special forces officers cordoned off an area where they exchanged fire with five attackers. Authorities reported that all five had been killed by Monday afternoon following an eight-hour gunfight.

"We will not be deterred by such outrage to pursue and punish the miscreants," he said on Twitter.

Taliban spokesman Zabihullah Mujahid said via Twitter that the explosion was followed by "multiple martyrdom seekers" who engaged in a firefight with Afghan forces.

The U.S. Embassy, which is in the vicinity, said it has not been impacted by the attack.

"We strongly condemn the Taliban's latest brutal attack against fellow Afghans," it tweeted.

The US Emb was not impacted by the ongoing #KabulAttack. Our thanks to the first responders in Kbl for their dedication to their fellow Afg citizens, and our condolences to those affected by the attack. We strongly condemn the Taliban's latest brutal attack against fellow Afgs.— U.S. Embassy Kabul (@USEmbassyKabul) July 1, 2019

Earlier, Mustafa Kazemi, director of police organizational communications for the Ministry of Interior Affairs, reported the explosion occurred at about 8:55 a.m.

"I was too close to the area but safe," he said. "Ears are still blocked."

The White House condemned the attack Monday night, saying it "demonstrates the Taliban's callous disregard for their fellow Afghans, who repeatedly voice the urgency of finding a peaceful resolution to the conflict."

The attack came amid ongoing negotiations between the United States and the Taliban in Qatar over U.S. troop withdrawal from Afghanistan, counterterrorism assurances, a cease-fire and intra-Afghan negotiations.

There has been a recent increase in attacks in Afghanistan by the Taliban. Prior to the car bombing in Kabul, Mujahid said that there had been 52 operations within the past 24 hours, resulting in almost 200 people killed.

Despite the recent uptick in violence, Ministry of Foreign Affairs spokesman Sibghat Ahmadi is optimistic about starting intra-Afghan talks within the coming weeks.

"The Afghan government is ready for unconditional talks with the Taliban given that achievements of Afghanistan are protected," he said.

World News // 8 hours ago
Putin reschedules Russian Victory Day parade for June 24
May 26 (UPI) -- Russian President Vladimir Putin said Tuesday the government will stage the Victory Day parade in about a month, after it was postponed due to the coronavirus pandemic.

World News // 12 hours ago
Volkswagen loses landmark civil case in emissions scandal
May 26 (UPI) -- Germany's highest civil court has ruled that Volkswagen must buy back vehicles that were fitted with illegal emissions software in a landmark decision in the "Dieselgate" scandal.

World News // 12 hours ago
Saudi Arabia to ease some restrictions this week, the rest in June
May 26 (UPI) -- Officials in Saudi Arabia said Tuesday they will relax coronavirus-related curfews and other restrictions for most of the country this week and they will be fully lifted nationwide next month.

World News // 15 hours ago
UNC: Unclear whether North Korean gunfire across DMZ was accidental
SEOUL, May 26 (UPI) -- The United Nations Command announced Tuesday that it had finished its investigation into a gunfire exchange inside the DMZ in early May and was not able to determine if North Korea's initial shots were accidental. 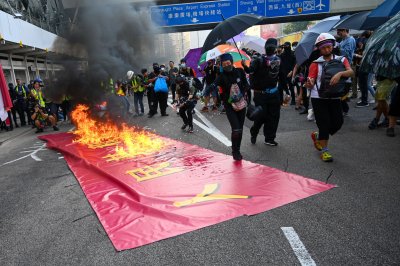