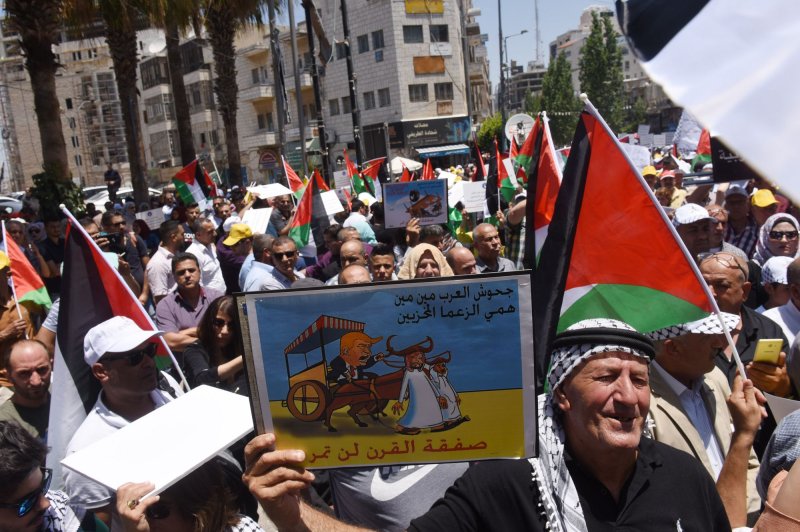 June 28 (UPI) -- Protesters stormed the Bahrain Embassy in Iraq late Thursday, burning the Israeli and U.S. flags in opposition to the peace conference more than 700 miles away.

The Trump administration launched the Peace to Prosperity Plan in Bahrain this week to end the Israeli-Palestinian conflict with a $50 billion economic stimulus plan. Palestinian leaders boycotted the meeting over concerns the proposal doesn't address any two-state solution. The Manama Workshop Tuesday and Wednesday was led by White House senior adviser Jared Kushner.

Demonstrators wanted to send a clear message to the countries participating in the Bahrain conference that they reject the U.S. plan and normalized relations with Israel.

By midnight, Iraqi security forces had arrived to shut down the protest, which Bahrain labeled an "attack." Bahrain also recalled its ambassador to Iraq.

Bahraini Foreign Minister Khalid bin Ahmed Al Khalifah said his government and Egypt's were the only Arab nations to recognize Israel, but "we know our brothers in the region do believe in it as well."

Some believe the protesters were secretly led by Sh'ite militias because some in attendance wore military uniforms. Others said the demonstration happened on its own, out of anger against Bahrain's support of Israel and the United States.

World News // 11 hours ago
Former Vatican bank chief sentenced to 9 years for embezzlement
Jan. 22 (UPI) -- The former head of the Vatican bank was sentenced to almost nine years in prison for money laundering and a real estate embezzlement scheme during the pontificates of Pope John Paul II and Pope Benedict.

World News // 13 hours ago
British court sends 4 to prison for 2019 lorry deaths of 39 migrants
Jan. 22 (UPI) -- A British court on Friday sentenced four people to prison, including the ringleaders of a human trafficking operation, for the deaths of 39 Vietnamese migrants who died after being smuggled into Britain in 2019. 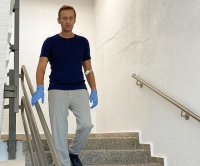 World News // 15 hours ago
U.N. official says rape, sexual violence rising in Ethiopia's Tigray conflict
Jan. 22 (UPI) -- A top United Nations official is demanding an end to sexual violence in the Tigray region of Ethiopia that has resulted from fighting between government forces and local factions.

World News // 15 hours ago
Japan, IOC reject report that officials expect to cancel Tokyo Olympics
Jan. 22 (UPI) -- Japan and the International Olympic Committee on Friday both denied a news report that claims officials expect they will have to cancel the upcoming Summer Games in Tokyo due to ongoing threats related to COVID-19.

World News // 21 hours ago
Google threatens to remove search from Australia over new law
Jan. 22 (UPI) -- Google threatened to disable its search engine in Australia if the government passes new regulations that would force large tech companies to negotiate with news organizations to present the content they produce.