Xi, who met with South Korean President Moon Jae-in on the sidelines of the G20 summit, was relaying a conversation he had had with Kim in Pyongyang, South Korean news agency Yonhap reported.

The statement comes at a time when North Korean state media and foreign ministry have criticized U.S. policy, including sanctions. North Korea has also reportedly told the South to stop playing "mediator" in negotiations with the United States.

In private conversations with Xi, Kim appeared to be sending a different message.

RELATED Trump in Japan ahead of G20 summit: 'We take care of our allies'

The North Korean leader told his closest partner that he is "willing to promote reconciliation with South Korea, and that he is not seeking to change the trend of dialogue on the Korean Peninsula," Seoul said.

In addition to a willingness to continue diplomacy with the outside world, Kim is trying to improve the livelihood of his people, Xi said.

The Chinese leader also raised the issue of U.S. missile defense in the South during the meeting, Newsis reported.

China wants the THAAD battery removed completely, citing its monitoring capabilities, but Moon said the system stays in central South Korea if denuclearization is not reached.

Moon had also suggested denuclearization and a "resolution on THAAD" could take place simultaneously, a Blue House official told Newsis.

China is wary of U.S. surveillance, which can extend as far as its northeastern provinces.

South Korea's spy agency said the policy could mean the two countries could engage in "low-level military exchange" without expanding the trade in weapons.

North Korea is under heavy sanctions that ban the trade of arms and military equipment.

World News // 16 hours ago
Police uncover largest-ever cocaine lab in Netherlands
Aug. 11 (UPI) -- Dutch police have arrested more than a dozen people during a raid that turned up what officials say is the largest cocaine lab ever found in the Netherlands, authorities said Tuesday.

World News // 16 hours ago
Polio vaccines return in Afghanistan, Pakistan after COVID-19 hiatus
Aug. 11 (UPI) -- Pakistan and Afghanistan have restarted Polio vaccinations after their campaigns were interrupted by the COVID-19 pandemic months ago, the United Nations Children's Fund said Tuesday. 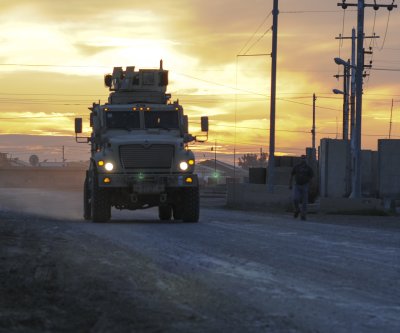 World News // 19 hours ago
Explosions target 2 U.S. supply convoys in Iraq
Aug. 11 (UPI) -- The Pentagon said Tuesday it is investigating a pair of attacks on U.S.-supported military convoys in Iraq.