June 14 (UPI) -- Authorities say they're still searching for another suspect in the assassination plot of former Boston Red Sox star David Ortiz -- a man known as "The Surgeon."

Investigators identified the fugitive as Luis Alfredo Rivas-Clase, who's also wanted in Berks County, Pa., for a 2018 shooting. Rivas-Clase was named by Dominican authorities with six others Wednesday.

The 43-year-old Ortiz, who played for the Red Sox between 2003 and 2016 and was a major part of its championship teams in 2004, 2007 and 2013, was shot last Sunday at a nightclub in the Dominican Republic. He's now recovering in a Boston hospital.

Authorities said the plot involved a bounty of almost $8,000 for Ortiz's death, and the group had stalked the retired baseball superstar in a coordinated attempted to assassinate him. Dominican authorities didn't say who ordered the hit, or why.

The suspected gunman, Rolfi Ferreira Cruz, 25, was also wanted by New Jersey authorities for two armed robberies in 2017, Dominican prosecutors said. He was arrested days after the shooting.

The Passaic County, N.J., Prosecutor's Office said Thursday Cruz was a suspect in a pair of armed robberies and officials were waiting for more information from Dominican authorities. Cruz's last known address was Reading, Pa.

Eddy Vladimir Feliz Garcia, accused of driving Cruz to the Santo Domingo nightclub where Ortiz was shot, was beaten outside the club and held for police. Authorities said they were able to locate the weapon used in the shooting. 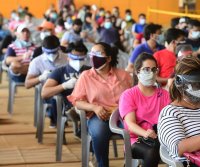