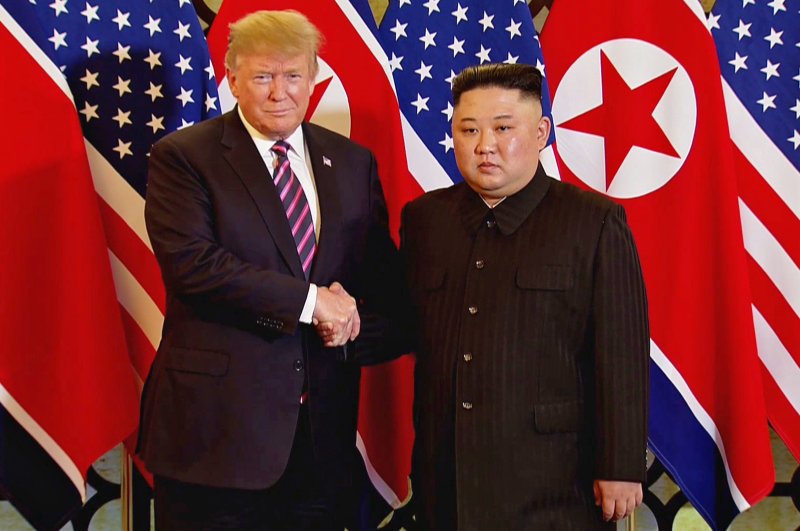 SEOUL, June 11 (UPI) -- One year after his June 12, 2018, summit with North Korean leader Kim Jong Un in Singapore, President Donald Trump said that he received a "beautiful" and "very warm" letter from Kim.

"I just received a beautiful letter from Kim Jong Un," Trump said on Tuesday. "I can't show you the letter, obviously, but it was a very personal, very warm, very nice letter. I appreciate it."

Speaking to reporters on the White House lawn, Trump characterized his relationship with Kim in positive terms, as he has frequently done.

"We have a very good relationship together," Trump said. "Now I can confirm it because of the letter I got yesterday. And I think that something will happen that's going to be very positive."

"I think North Korea has tremendous potential," he added. "And the one that feels that more than anybody is Kim Jong Un. He gets it. He totally gets it."

South Korea's presidential office said on Wednesday that it was aware of the letter, but gave no additional details about its contents.

"We had knowledge (of it)," Yoon Do-han, senior secretary to President Moon Jae-in for public communication, said in a text message to reporters, South Korean news agency Yonhap reported.

President Moon mentioned the anniversary of the Singapore summit during remarks at a forum in Oslo, Norway, on Wednesday. Noting that negotiations "appear in a stalemate," Moon said it was because "we need some time to understand each other thoroughly."

"What we need now is not a new vision or proclamation," he said, "but the deepening of mutual understanding and trust."

President Trump also commented Tuesday on a report that Kim Jong Nam, Kim Jong Un's half-brother who was killed in a Malaysian airport in 2017, was an informant for the CIA, saying that such a situation would not occur under his administration.

Trump said that he didn't know whether Kim Jong Un was responsible for having his half-brother killed, as has been widely speculated.

Talks between the United States and North Korea have been at an impasse since the second Trump-Kim summit, held in Hanoi, Vietnam, in February.

That meeting ended abruptly without an agreement and both sides remain at odds over issues of international sanctions relief and North Korean denuclearization.

Recently, the rhetoric from North Korea has turned more combative, with a ministry of foreign affairs spokesman saying last week that the United States needed to change its approach to negotiations and warning that "there is a limit to our patience."

A North Korean propaganda website echoed those sentiments on Wednesday.

"The U.S. should be entirely held accountable for the breakdown of the second summit," the website Uriminzokkiri wrote on Wednesday, Yonhap reported.

"What the world wants with regard to North Korea-U.S. talks is the U.S.'s goodwill and corresponding measures in response to our goodwill and active steps and also its practical efforts to pave the way for the resumption of talks with its new method of calculation."

North Korea also resumed missile launches last month for the first time since late 2017. A report released last week by U.S. Congressional Research Service concluded that the three projectiles fired on May 4 and May 9 were short-range ballistic missiles.

On Tuesday, national security adviser John Bolton said that North Korea has not kept its word on the commitments it made after the first Trump-Kim summit.

"They're doing a lot of other things that still indicate that they have not made a strategic decision to give up the pursuit of deliverable weapons, which is why we continue the maximum pressure campaign."

Trump, however, offered a contradictory take hours later on Tuesday, saying that Kim Jong Un has "kept his word."

"There's no nuclear testing, there's no long-range missiles going up," Trump said. "The only things he sent up were very short-term, short-range. That was just a test of short range. It's a whole different deal."

Trump added that a third summit with Kim "could happen."

World News // 12 hours ago
Trial starts in Russia for WNBA star Brittney Griner
July 1 (UPI) -- The Moscow cannabis oil possession trial of WNBA player Brittney Griner began Friday, with Griner facing a possibility of up to 10 years in a Russian prison if convicted.

World News // 13 hours ago
Inflation jumps to record 8.6% in eurozone
July 1 (UPI) -- Inflation in the eurozone reached an annual rate of 8.6% in June, an increase from 8.1% in May, according to the latest European economic statistics released Friday.

World News // 14 hours ago
Former U.S. military base in South Korea to become green park in heart of Seoul
SEOUL, July 1 (UPI) -- For almost 120 years, Yongsan Garrison has been off-limits to South Korean civilians -- but now the walled compound in the heart of Seoul is turning into a public park that officials say will transform the city.

World News // 1 day ago
Xi Jinping returns to Hong Kong for first trip outside of mainland China in two years
June 30 (UPI) -- Chinese President Xi Jinping traveled to Hong Kong on Thursday to mark the 25th anniversary of its return from British rule and to inaugurate the administration of its new chief executive, John Lee.