IAF: Troops deployed to crash site of missing AN-32 aircraft 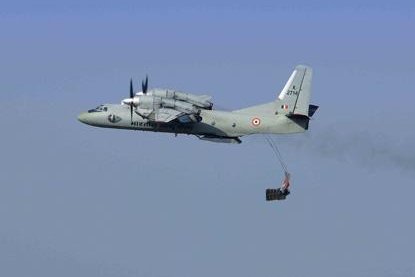 June 12 (UPI) -- A day after the wreckage of a missing Indian Air Force plane was spotted in a remote mountainous region near the Chinese border, India said a rescue operation was underway to search for survivors.

"Rescue Operation for the crashed AN-32 is in full swing by IAF," it said in a tweet. "Additional resources have been mobilized to search for survivors."

#Update: #Rescue Operation for the crashed An-32 is in full swing by #IAF. Additional resources have been mobilised to search for survivors. 04 Garuds of #IAF as part of the recovery party were dropped by helicopter near the crash site, where a camp has been established.— Indian Air Force (@IAF_MCC) June 12, 2019

The AN-32, carrying eight crew and five passengers, was reported missing June 3 after it did not reach its destination of Mechuka Village, near the Chinese border.

The aircraft last made contact with ground agencies at 1 p.m., about a half hour after it took off from Jorhat, in the state of Assam, the Ministry of Defense said in a statement.

The wreckage of the aircraft was found Tuesday at an approximate elevation of 12,000 feet about 10 miles north of Lipo in Arunachal Pradesh by an IAF helicopter conducting a search for the plane in the area.

"Efforts are now continuing to establish the status of occupants and establish survivors," the ministry said in a release.

Despite having identified the site Tuesday afternoon, a Cheetah helicopter and an ALH helicopter conducting searches in the area were unable to land due to the elevation and dense forest, the IAF said.

"However, nearest landing site has been identified & the rescue operation by helicopters will commence tomorrow early morning," the IAF said on Twitter. "Ground forces will continue to reach the crash site during the night."

Search operations had so far been hampered due to the dense forests, elevation and weather, the IAF said.

World News // 15 hours ago
Polls close in Kenyan election amid tight two-person race
Aug. 9 (UPI) -- The polls have closed in Kenya's Tuesday election, as the country moves toward choosing a replacement to President Uhuru Kenyatta.

World News // 21 hours ago
British weather office issues 'Amber' warning for more extreme heat
Aug. 9 (UPI) -- Britain's Met Office on Tuesday issued an Amber extreme heat warning for many regions of the country later this week, when temperatures are forecast to get near triple digits.

World News // 22 hours ago
Revolutionary Japanese fashion designer Issey Miyake dies at 84 after cancer battle
Aug. 9 (UPI) -- Issey Miyake, a tour de force of Japanese style and fashion for more than five decades, has died after a battle with liver cancer. He was 84.

World News // 23 hours ago
Russia shells areas in eastern Ukraine amid rising concern for nuclear power plant
Aug. 9 (UPI) -- Russian shelling on Tuesday targeted Ukrainian positions in the eastern and southern regions -- part of Moscow's military offensive to seize areas in the Donbas -- but Ukrainian officials said they made no major gains.
Advertisement