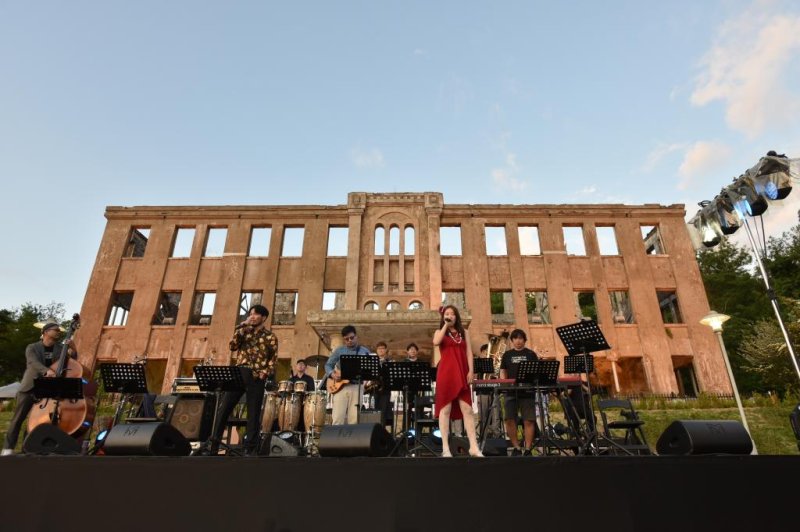 CHEORWON, South Korea, June 10 (UPI) -- More than 10,000 fans came out to listen to music over the weekend on the edge of the demilitarized zone, the heavily fortified 160-mile-long buffer that has divided the Korean Peninsula since the end of the Korean War in 1953.

The second DMZ Peace Train Festival was held Friday through Sunday in Cheorwon County, about 50 miles northeast of Seoul, an area that saw heavy fighting during the three-year war at famed locations such as Bloody Ridge and Pork Chop Hill.

Musicians performed at the main festival site in the village of Goseokjeong, as well as historical locations in the area, including the defunct Woljeong-ri Station, the northernmost train station in South Korea, and the ruins of the former headquarters of the Workers' Party of Korea, built while Cheorwon was still under North Korean control.

Elias Bender Rønnenfelt, lead vocalist of Iceage, said the offer to play at such an unusual location, which is also home to a nearby South Korean military base, was hard to resist.

"We got asked to play and it seemed like a privilege to have an opportunity to see a demilitarized zone like this," he said. "And it seems like the festival's intentions were quite noble, so it was a no-brainer."

The 27-year-old frontman said he wasn't sure what to expect when he arrived.

"In my imagination, I actually thought the stage was going to be on the border, with maybe like a sniper sight on the back of your neck and men with machine guns on the side of the stage," he said. "There is a military presence, but they're running around eating ice cream and drinking soda. It's surprisingly light-hearted."

The DMZ Peace Train Festival was organized in 2018 by private promoters but sponsored by the county government and Gangwon Province, where Cheorwon is located.

One of the festival's co-founders, Yi Soo-jeong, 37, said that officials were eager to participate when she and her partners approached them with the concept of hosting an international music event at the DMZ.

Gangwon Province was particularly keen to capitalize on the 2018 Pyeongchang Winter Olympics, which included joint participation by North Korea and was heralded as by President Moon Jae-in as the "Peace Olympics," she said.

"They gave us the budget, but at the same time, they gave us the absolute freedom, absolute authority to organize all the content," said Yi, who also helps run a music festival in Seoul.

South Korea has been making a concerted effort to rebrand the DMZ as a tourism destination in the wake of a renewed period of détente with North Korea, which began in early 2018.

The government is in the process of opening a series of "peace trails" along the DMZ, with a section open in Goseong and a new trail launched at the beginning of June in Cheorwon.

The Cheorwon trail includes views of Arrowhead Hill, the site of some of the fiercest fighting during the Korean War, an area where recovery efforts are underway to exhume remains of soldiers that died there. Hikers will also be able to visit a guard post that was decommissioned as part of a military agreement signed at the Pyongyang inter-Korean summit in September 2018.

In recent months, however, the peace process with North Korea has stalled, as Pyongyang and Washington remain at an impasse over negotiations for dismantling the North's nuclear program.

A February summit in Hanoi, Vietnam, between U.S. President Donald Trump and North Korean leader Kim Jong Un ended abruptly without an agreement, and since then, inter-Korean relations have been in a holding pattern, South Korean government officials said recently.

For many festival-goers, however, the music was the main draw, with the politics behind the DMZ a secondary consideration.

"We just came to see the bands and to enjoy the local food and the pure nature around here," said Kim Yu-young, 28, who traveled to Cheorwon from Seoul with a group of friends. "But the theme of the festival does add some meaning."

Musician Lee Dong-min, a 25-year-old Korean R&B singer who performers under the name George, said he didn't think the festival would impact the political situation but thought the location itself could send a message of peace.

"Even small events like this are important," he said. "Korea is the only divided country in the world and it's meaningful to play so close to the border."

He added that because much of the area around the heavily militarized zone has been inaccessible and undeveloped for decades, it's been left with an unspoiled, almost idyllic atmosphere.

"The DMZ is a peaceful place, ironically, because no one has been able to touch this area," he said. "I think people coming here can feel that peaceful vibe, and that could affect them."

"It is one the most the most intense areas in terms of military in Korea," agreed festival co-founder Yi Soo-jeong. "But this intense area seems so peaceful. It's so beautiful, but nobody knows about it yet."

World News // 2 hours ago
Police: Online scams, drugs dominated rise in Hong Kong crimes in 2021
Jan. 27 (UPI) -- Hong Kong police on Thursday reported an increase in online scams last year, including a 24% rise in fraud cases with 70% of them occurring over the internet.

World News // 5 hours ago
Scottish civil court rules soldier raped woman in landmark case
Jan. 27 (UPI) -- A civil court in Scotland ruled Thursday that an active-duty British soldier raped a woman in 2015, after a criminal court in that country found the charges were "not proven."

World News // 8 hours ago
Greenpeace fears 100,000 'ghost flights' in Europe this winter will cause major climate damage
Jan. 27 (UPI) -- Environmental advocates are expressing concern about a tactic that some airlines are taking this winter in order to keep their airport permits -- "ghost flights," which are flights that carry few or no passengers.

World News // 13 hours ago
China tells U.S. to 'stop interfering' in Beijing Olympics
Jan. 27 (UPI) -- China's top diplomat said the United States should stop meddling in the upcoming Beijing Winter Games and warned against "playing with fire" on the Taiwan issue on Thursday.