June 7 (UPI) -- Theresa May officially resigned Friday as leader of the British Conservative Party, and will spend only a few more weeks in the prime minister's office.

May took the official step by submitting her letter of resignation to the parliamentary 1922 Committee.

"The joint acting chairs of the 1922 Committee are inviting nominations from those Conservative members of Parliament who wish to stand for election as the next party leader," the panel wrote Friday.

May leaves just shy of exactly three years as party leader. She was elected just 18 days after British voters chose in the 2016 referendum to leave the European Union. A formal agreement, however, has been elusive and May hasn't been able to get lawmakers to approve multiple proposals. She announced her decision to quit as prime minister last month. Britain is scheduled to leave the EU at the end of October.

The latest version of May's 585-page proposal, which was voted down by Parliament three times, will remain on the table once she leaves.

British Chancellor Philip Hammond said he's set aside billions of pounds as a contingency in case no deal is reached -- a prospect none of the candidates to replace May have ruled out.

The next prime minister will be chosen in late July.

Some Conservatives like Esther McVey favor a no-deal exit and say it would be best to "actively embrace leaving without a withdrawal agreement." Other candidates such as Boris Johnson, Sajid Javid and Jeremy Hunt have said they would change certain aspects of the deal. 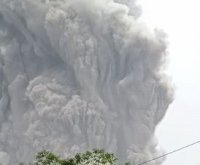