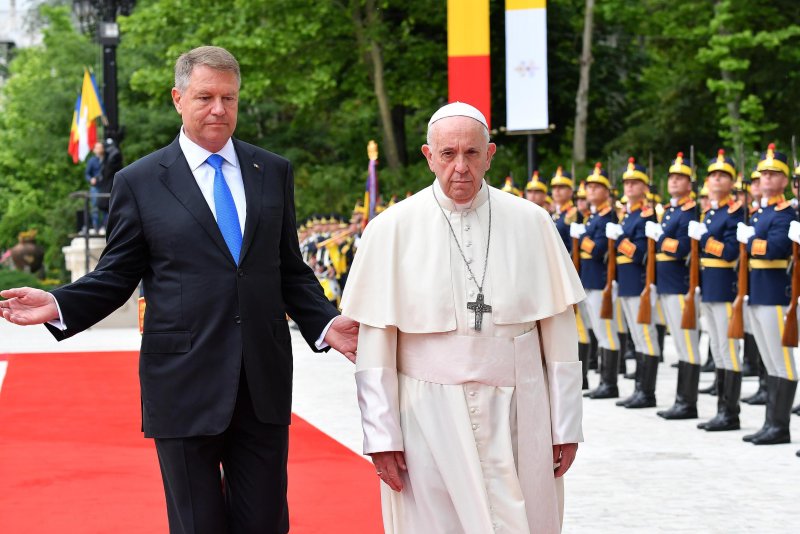 Pope Francis meets with Romanian President Klaus  Iohannis during a welcome ceremony at the Cotroceni Presidential Palace in Bucharest, Romania on Friday. Photo by Ettore Ferrari/EPA-EFE

May 31 (UPI) -- Pope Francis made his first visit to Romania on Friday, aiming to mend ties with the Orthodox Church, meet with Romanian leaders and visit medieval sites.

Francis was greeted with a large crowd of leaders, Catholics and children when he arrived in Bucharest about 11:30 a.m.

"It is a great pleasure to have you here, on Romanian soil," Romanian President Klaus Iohannis said.

Francis gave a speech after meeting with Iohannis at the Cotroceni Palace on the strides the country has made since the fall of communism.

"I am happy to be in your beautiful country 20 years after the visit of St. John Paul II, at a time when Romania, for the first time since joining the European Union, holds the presidency of the council of the EU," Francis said. "This is a good time to have an overview of the 30 years since Romania liberated itself from a regime that suppressed civil and religious liberty and isolated it from other European countries, and which, in addition, led to the stagnation of the economy and the exhaustion of its creative forces."

Francis addressed the migration of Romanians west to other European countries.

"I pay tribute to the sacrifices made by so many sons and daughters of Romania who, with their culture and their patrimony, enrich the culture of other countries," Francis said.

The pontiff was also expected to meet with the Synod of the Romanian Orthodox Church at the new Orthodox church in Bucharest. The pope was to finish the day celebrating mass at Saint Joseph Cathedral.

Francis is scheduled to travel to other areas of Romania, including the Marian Shrine of Sumuleu-Ciuc. On Sunday, he will celebrate the Divine Liturgy and beatify seven Greek Catholic bishops who were martyred during the communist regime.

The pope will return to the Vatican on Sunday evening.

World News // 11 hours ago
Facebook to hire 10K EU workers to build 'metaverse'
Oct. 18 (UPI) -- Facebook has announced plans to hire 10,000 people in Europe over the next five years to develop its new platform.