May 9 (UPI) -- Israel marked its independence on Thursday with a ceremony in Jerusalem and a flyover of the military's fighter planes.

Knesset Speaker Yuli Adelstein encouraged Israelis to use the day to remember where they came from.

"Some nations are blessed with large territory, others have natural resources, others with large populations, and what do we have? We have a tale of a nation of slaves that became free and brought the world hope for freedom," he said.

The Israeli air force conducted flyovers and carried out acrobatic maneuvers throughout the country, including near Gaza border communities.

Speaking at the International Bible Quiz for Youth, an annual tradition on Independence Day, Israeli Prime Minister Benjamin Netanyahu spoke about the country's space ambitions. He promised to make Israel the fourth country to land on the moon one month after the Beresheet spacecraft crashed into the moon.

The spacecraft had a digital copy of the Bible on board, but Netanyahu said "that's not enough."

"We're going to send the spacecraft again, and it's very likely it will be carrying a small Bible. I want the Bible to land on the moon, because it is written, 'When I behold your heavens, the work of your fingers, the moon and the stars which you have established.' The state of Israel will reach the moon," he said.

World News // 4 hours ago
Delivery service criticized in China for suspending BTS-related packages
Oct. 20 (UPI) -- A Chinese delivery service that said it had stopped transportation of all packages related to BTS is under fire for the statement posted to a local social media platform. 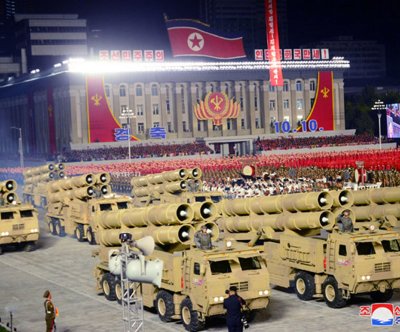