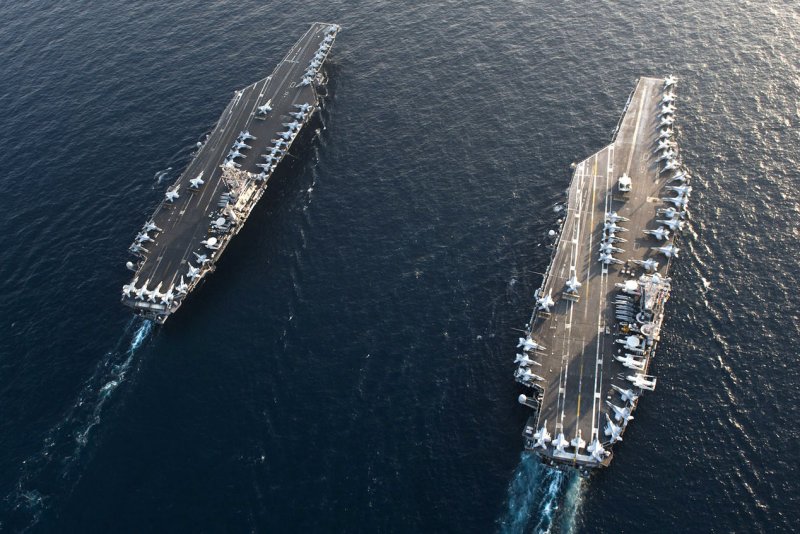 An aerial view of the Nimitz-class aircraft carriers USS John C. Stennis and USS Abraham Lincoln, which are expected to meet in the Persian Gulf in response to Iranian threats. Photo by Kenneth Abbate/U.S. Navy | License Photo

May 6 (UPI) -- The USS Abraham Lincoln Carrier Strike Group and a bomber task force are being deployed to the Middle East in response to threats to U.S. troops by Iran or their allies, American government officials said.

The United States is responding to "a number of troubling and escalatory indications and warnings," White House national security adviser John Bolton said. He didn't provide details but said the United States wants to send a "clear, unmistakable" message to Iran that "unrelenting force" would meet any attacks against U.S. troops or allies.

"The United States is not seeking war with the Iranian regime, but we are fully prepared to respond to any attack, whether by proxy, the Islamic Revolutionary Guard Corps, or the regular Iranian forces," Bolton said.

A Defense Department official told CBS News that U.S. intelligence has detected a "number of preparations for possible attack" on land and at sea.

"There is more than one avenue of attack or possible attack that we're tracking ... This has been moving pretty fast today (Sunday)," the official said.

In addition to the USS Abraham Lincoln aircraft carrier, the strike force includes the guided missile cruiser USS Leyte Gulf and destroyers from the Destroyer Squadron 2. The group left the Naval Station Norfolk on April 1. The USS John Stennis aircraft carrier and its associated strike group has already been in the Persian Gulf since March.

Tensions with Iran have skyrocketed in the last week since the Trump administration ended waivers that allowed some countries to continue buying Iranian crude oil despite U.S. sanctions. That means China, India, Japan, South Korea and Turkey can no longer buy crude oil from Iran, putting increased pressure on Tehran.

The United States also officially designated the IRGC as a terrorist group recently, which prompted Iran to turn around and name U.S. forces as terrorists as well. It's been a year since President Donald Trump withdrew the United States from the Iran nuclear deal.

Secretary of State Mike Pompeo said the strike force deployment has been in the works for a little while.

World News // 5 hours ago
AstraZeneca strikes deal with Oxford Biomedica to make COVID-19 vaccine
May 28 (UPI) -- AstraZeneca and Oxford Biomedica announced a deal Thursday to work together to manufacture a potential vaccine for COVID-19 that is set to enter advanced trials in June.

World News // 6 hours ago
Britain considering opening citizenship to some in Hong Kong
May 28 (UPI) -- British Foreign Secretary Dominic Raab said Thursday the country would consider removing barriers to citizenship for about 300,000 people in Hong Kong after China passed a controversial security law.

World News // 8 hours ago
Attack on checkpoint near Kabul kills 7 Afghan soldiers
May 28 (UPI) -- At least seven Afghan soldiers died in an attack on a security checkpoint that local officials blamed on the Taliban.

World News // 16 hours ago
British carrier EasyJet to cut up to 30% of total workforce
May 28 (UPI) -- EasyJet said Thursday it plans to cut 4,500 jobs, roughly a third of its entire workforce, as it moves to withstand the economic impact of the coronavirus on the airline industry.