The Russian Aeroflot plane caught fire after bouncing on the runway at Moscow's airport Sunday. Investigators recovered the black boxes from the crash site. Photo courtesy of  Russian Investigative Committee/EPA-EFE

May 6 (UPI) -- The black box flight recorders have been recovered from the Aeroflot plane crash site at the Moscow airport where at least 41 people died, Russian officials said Monday.

The Sukhoi Superjet 100 bounced on the runway and the rear of the plane burst into flames as it made an emergency landing Sunday night. Two children were among those killed.

Another 33 passengers and four crew members escaped the plane using slides. Five people were taken to the hospital.

An American citizen was among those killed, the U.S. State Department confirmed.

No official cause for the crash had been determined, but the Russian Interfax news agency reported a "loss of communication" caused by a lightning strike. The plane was flying from Moscow to Murmansk.

Aeroflot published a statement saying the crew "did everything in its power to save passenger lives and provide emergency assistance to those involved. Tragically, they were unable to save all of those aboard."

The captain was the last to exit the aircraft. The airline offered its condolences and offered to fly relatives of the victims to Moscow at no charge.

"We were so scared, we almost lost consciousness," Egorov told Komsomolskaya Pravda daily. "The plane jumped down the landing strip like a grasshopper and then caught fire on the ground."

Video showed passengers jumping from the wreckage to an inflatable slide with people clinging to their luggage as emergency vehicles raced toward the crash site.

Russian news reports have stated the plane was serviced as recently as last month.

The pilot had 1,400 hours of experience flying the two-engine Sukhoi Superjet.

World News // 46 minutes ago
Brucellosis cases in China exceed 10,000 after vaccine factory accident
Dec. 4 (UPI) -- More than 10,000 people in China are reportedly infected with a highly contagious disease that can lead to chronic health issues, after a vaccine factory used expired sanitizer, and bacteria spread through the plant.

World News // 7 hours ago
U.S. witness to 1980 South Korea massacre recalls brush with death
NEW YORK, Dec. 4 (UPI) -- The 1980 slaughter of South Korean civilians in Gwangju had an unlikely eyewitness in a former U.S. Peace Corps volunteer who smuggled himself into the city during the military crackdown. 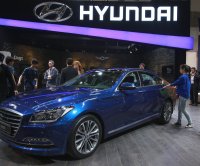 World News // 1 day ago
South Korea holds crucial college entrance exam amid pandemic
SEOUL, Dec. 3 (UPI) -- With a slew of COVID-19 precautions in place, over 400,000 South Korean students turned out Thursday to take the eight-hour CSAT, a once-a-year exam seen as a vital stepping stone for a successful future.