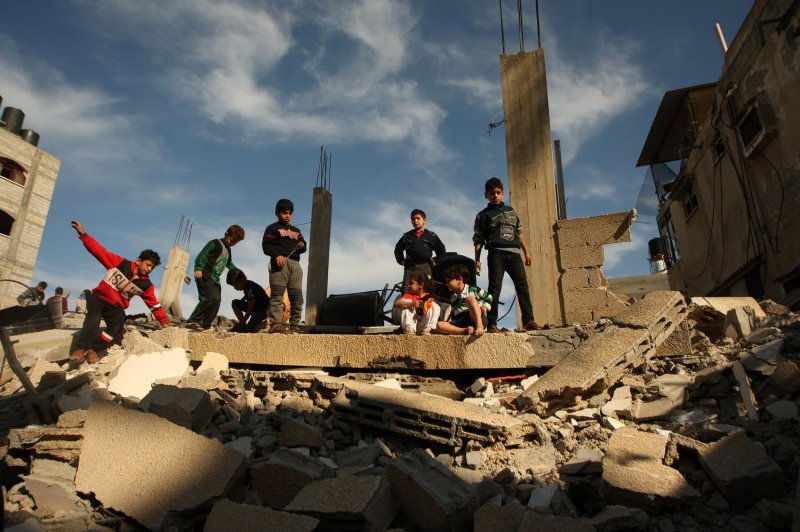 Palestinians examine their home that was destroyed during Israeli airstrikes in Rafah in southern Gaza on Sunday. Palestinian militants fired approximately 430 rockets at Israel and Israel responded with 260 airstrikes. Photo by Ismael Mohamad/UPI | License Photo

May 5 (UPI) -- Responding to approximately 600 rockets fired toward Israel since Friday, the Israel Defense Forces hit 260 targets across Gaza.

On Sunday after a Cabinet meeting, Israeli Prime Minister Benjamin Netanyahu posted on Twitter that Israel will "continue the massive attacks against terrorist organizations in the Gaza Strip, and I had to thicken the forces around the Gaza Strip with armor, artillery and live forces. "

Netanyahu said "Hamas is responsible not only for its attacks and actions, but also for Islamic Jihad operations and it pays a very heavy price."

On Saturday night, Hamas threatened "the next step is to blow up Tel Aviv," The Jerusalem Post reported.

Since tensions ratcheted up along the border Friday, three Israeli men and 16 Palestinians, including a pregnant woman and her infant niece, have been killed, Haaretz reported.

A 58-year-old man became the first Israeli to be killed by rocket fire since the end of the 2014 war. He died when a rocket hit his house in Ashkelon, according to a statement from Barzilai hospital obtained by CNN.

The IDF said Hamed Ahmed Abed Khudari, who was in charge of large-scale money transfers from Iran to Gaza, was killed Sunday. Hamas said the killing of a senior member of the organization is the first such targeted hit since 2014.

Two gunmen from the armed wing of Islamic Jihad were killed overnight in Gaza, according to a statement from the militant group, and two other Palestinian men died in earlier airstrikes Saturday.

A 1-year old Palestinian baby and the baby's pregnant mother died in Gaza. The IDF said the deaths were caused by a Hamas rocket that misfired.

On Saturday, about 90 rockets were fired toward Israel over an hour and continued late into the evening.

The Iron Dome aerial defense system had intercepted dozens of the incoming rockets.

Schools sessions were canceled across the south.

Israel also announced that it is indefinitely closing the two border crossings between Israel and Gaza, as well as closing the Gaza fishing zone. The fishing zone was moved to 6 nautical miles earlier this week after a rocket fired from Gaza that landed off the coast of Israel.

On Sunday, Israel allowed 17 fuel trucks into Gaza, with 650,000 liters of fuel passing through the Kerem Shalom crossing. Authorities closed the crossing. Egypt has opened the Rafah crossing to allow goods into Gaza.

Haaretz reported a Hamas political official taking part in the talks with Egyptian mediators in Cairo, said that the talks are continuing without any practical results.

He said there is no reason to expect a de-escalation in until Israel implements ways to improve the lives of Gaza's civilians.

World News // 1 day ago
Former U.S. military base in South Korea to become green park in heart of Seoul
SEOUL, July 1 (UPI) -- For almost 120 years, Yongsan Garrison has been off-limits to South Korean civilians -- but now the walled compound in the heart of Seoul is turning into a public park that officials say will transform the city.
Advertisement