Thailand has crowned its first king in nearly 69 years at the Grand Palace in Bangkok on Saturday. Photo by Thailand Public Relations Department/EPA

The Saturday coronation of Maha Vajiralongkorn is the first time anyone has officially sat on the throne since his father, King Bhumibol Adulyadej, died in 2016. Vajiralongkorn has ruled since the death of his father, who was coronated in 1950.

During the three-day coronation, which began at the Grand Palace in Bangkok, 66-year-old Varjiralongkorn will travel through Bangkok for public display on a royal palanquin.

Vajiralongkorn was given a gold 7.3-kilogram crown and purified with sacred royal water as part of the ceremony. In all, the event cost $31 million.

RELATED Japan's next emperor is a modern, multilingual environmentalist

"I shall continue, preserve and build upon the royal legacy and shall reign with righteousness for the benefit and happiness of the people forever," the king said as his first royal command.

The event comes at a time when Thailand faces political turmoil.

In February, Vajiralongkorn's sister, Princess Ubolranta Mahidol, announced her candidacy to run for Thailand's prime minister position. But Vajiralongkorn opposed his sister's candidacy, and a court-ordered dissolution of her political party two weeks before the election blocked her from continuing in the race.

When the election took place in March, its results were uncertain. Both major political parties in Thailand claimed victory but neither was officially declared the winner.

This year's elections were the first in five years when Thailand's army took over the government in a coup.

Since Thailand ended absolute monarchic rule in 1932, the country has been ruled by an official government.

The king, however, still holds a high level of influence.

Criticizing the king is punishable by up to 15 years in prison. 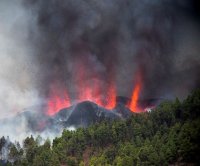 World News // 12 hours ago
At least 8 killed by gunman in shooting spree at Russia's Perm State University
Sept. 20 (UPI) -- At least eight people were killed and more than two dozen were injured at a university campus in central Russia on Monday after authorities say a gunman opened fire and targeted victims at random.