Tropical Cyclone Kenneth is seen off the coast of eastern Africa Wednesday. The storm arrived late Thursday and is the strongest on record to hit Mozambique. Image courtesy NOAA

The storm, equivalent to the strength of a Category 4 hurricane, arrived late Thursday and pushed inland with sustained winds near 125 mph. Officials said Kenneth has already killed three people in Comoros, and forecasters say the region could see as many as 10 inches of rain. Experts also warned of life-threatening storm surges between 10 and 16 feet tall.

Kenneth is the strongest storm to hit Mozambique in recorded history, and officials said hundreds of thousands are at risk from floods and mudslides.

"Aside from storm damage, the greatest risk will immediately be flooding due to heavy rains," said Marc Nosbach, CARE Mozambique's country director. "At least one of the dams is close to full capacity, preventing flood water from being retained. This will make it impossible to distribute aid as roads become impassable."

The storm will also affect southern Tanzania and the Manpula region of Mozambique, meteorologists said.

The United Nations said it's preparing emergency aid through its World Food Program.

"We are expecting that heavy rain will provide flash floods and landslides impacting the north-eastern provinces of Cabo Delgado and Nampula," WFP spokesman Herve Verhoosel said Thursday. "More than a million people [are] struggling to get back on their feet [from Cyclone Idai]."

Warehouses in Mozambique already have 300 tons of food and the WFP urged humanitarian partners to protect the food and "weather the storm," Verhoosel said.

World News // 16 hours ago
Chinese dissident who defaced Xi poster says she's on 'verge of collapse'
Dec. 2 (UPI) -- A woman who said she was forcibly hospitalized twice after defacing a poster of Chinese leader Xi Jinping in 2018 said she is the target of surveillance.

World News // 16 hours ago
Israel pays $1.1B in back tax payments to Palestinian Authority
Dec. 2 (UPI) -- The Israeli government on Wednesday said it's paid more than $1 billion in a backlog of tax money to the Palestinian Authority, after an impasse over the summer interrupted what are usually monthly payments.

World News // 16 hours ago
Israeli Knesset passes bill to disband in step toward another election
Dec. 2 (UPI) -- Israel's legislative body on Wednesday approved a preliminary resolution that calls for its dissolution, which would result in the country's fourth election in less than two years. 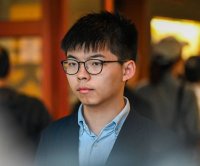 World News // 18 hours ago
Activist Joshua Wong given prison sentence for Hong Kong police protest
Dec. 2 (UPI) -- A prominent pro-democracy leader in Hong Kong was sentenced Wednesday to more than a year in prison for his role in a police protest that was part of mass demonstrations there last year.