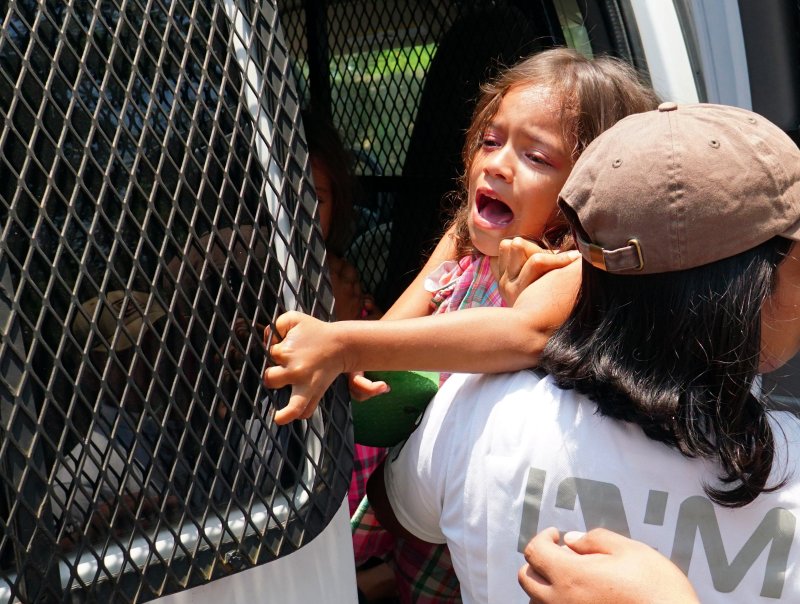 Agents of Mexico's National Institute of Migration of Mexico detain a young girl Monday during an operation in Pijijiapan. Photo by Daniel Ricardez/EPA-EFE

April 24 (UPI) -- Mexico has deported about 15,000 migrants from Central America who'd been part of a caravan trying to reach the United States, Mexican officials said.

Mexican President Andres Manuel Lopez Obrador has changed his policy for migrant caravans, amid pressure from U.S. President Donald Trump. Migrant groups that used to be welcomed in Mexico are now being detained by police and sent back.

"[They are] mainly from Central America, but also from other countries," Alejandro Encinas, Mexico's interior secretary for humans rights, said Monday.

Mexican authorities raided one caravan Friday to check for legal migration documents. Officials said they deported many who didn't have them. Mexican authorities this week set up a checkpoint south of Pijijiapan with buses and trucks to haul the migrants back across the nation's southern border. Some migrants had armed themselves with sticks and stones to fight off the Mexican police, officials said.

Despite Mexico's effort, officials say thousands more continue to flow into the country hoping to make it to the United States. U.S. Customers and Border Protection reported 92,000 unauthorized immigrants in March -- the highest figure in 11 years.

In addition to the deported, Mexico said it's also detained 3,200 migrants in shelters along its southern border with Guatemala.

World News // 9 hours ago
COVID-19 surging in Russia; weekly world deaths drop 10%, cases 5%
June 20 (UPI) -- As coronavirus subsides through much of the world, the pandemic is surging in Russia with record cases last week and the most deaths in three months.

World News // 6 hours ago
Israeli PM Naftali Bennett says patience with Hamas 'has run out'
June 20 (UPI) -- Israeli Prime Minister Naftali Bennett warned Sunday that Israel's patience for the militant group Hamas "has run out" in his first public statement as head of the government.