Demonstrators celebrate Thursday as they head towards the army headquarters amid rumors President Omar al-Bashir was removed from power. Photo by EPA-EFE

Defense Minister Awad Mohamed Abmed Ibn Auf said al-Bashir was taken into custody and his government dissolved. He also said there will be a two-year transition period between governments.

Earlier, a telegram sent by the Sudanese military indicated the coup had occurred. It claimed the army had taken power and said it would form a military council to manage the country. Armored vehicles took strategic positions around the city.

Thousands of protesters marched in Sudan's capital Thursday waiting for confirmation that he'd been forced out. A crowd of demonstrators gathered outside the military headquarters in Khartoum, shouting, "you've been dancing for 30 years. Today it's our turn to dance."

Opponents to al-Bashir's rule have been demonstrating for four straight months.

"It's a huge day for Sudan's people, it's a revolution day," protester Elsamawal Alshafee told The New York Times.

"In spite of all hurdles and hardships, it is over," said demonstrator Ahmed Elyas. "We won."

Al-Bashir took power with a bloodless coup in 1989 and remained for three decades. During his tenure, he was the subject of constant criticism from the West, which said he'd committed genocide in Darfur. 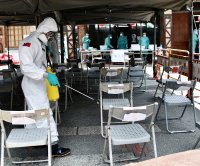