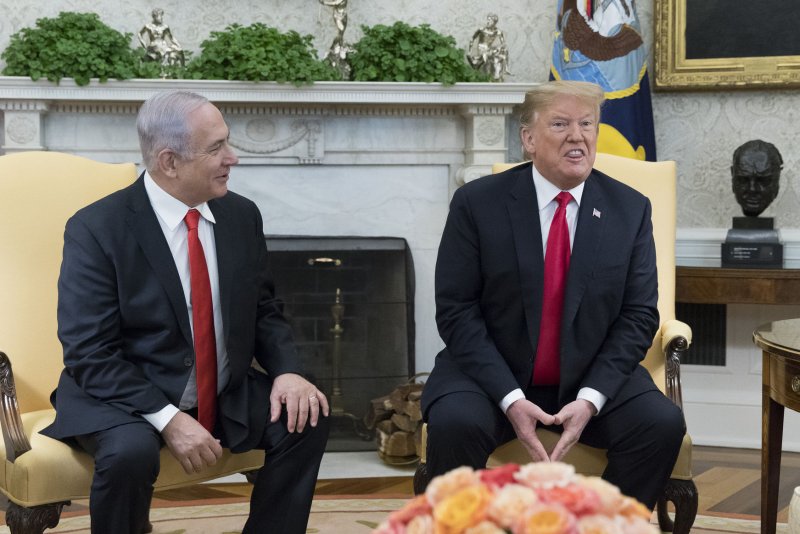 During a TV interview on Channel 12 News' Meet the Press, Netanyahu said he would extend Israeli sovereignty if he is elected to a fifth term. He didn't mention how much of the territory, which is occupied by Palestinians, would be affected.

"A Palestinian state will endanger our existence and I withstood huge pressure over the past eight years, no prime minister has withstood such pressure," he said. "We must control our destiny."

His stance is backed by right-wing voters.

Last month, Netanyahu was in the White House when President Donald Trump declared the United States would recognize Israeli sovereignty over the Golan Heights.

"Will we move ahead to the next stage?" he said in the interview. "Yes. I will extend sovereignty but I don't distinguish between the settlement blocs and the isolated ones, because each settlement is Israeli and I will not hand it over to Palestinian sovereignty."

Israel captured the Golan Heights from Syria and the West Bank from Jordan in the 1967 Middle East war.

"I will not divide Jerusalem, I will not evacuate any community and I will make sure we control the territory west of Jordan," Netanyahu told the show's host, Rina Matzliah.

Netanyahu has vowed to evacuate Palestinians from the area, an idea that has been condemned by other nations.

Netanyahu' Likud party is trailing Blue & White by several seats in most polls, but he could rule in a coalition with other right-wing parties.

"Netanyahu's talk of West Bank annexation needs to be taken with a big grain of salt," Shalom Lipner, a senior fellow at the Atlantic Council who has served seven Israeli prime ministers, told Bloomberg News. "With only three days left in a brutal election campaign, he and his competitors are all searching desperately for an edge to put them over the top at the polls. The annexation card -- popular among a large swath of Netanyahu's supporters -- is the ultimate Hail Mary pass."

Negatively, Netanyahu is dealing with potential indictment on bribery and fraud charges.

World News // 48 minutes ago
Updated EU forecast projects greater declines in 2020 before rebound
July 7 (UPI) -- The European Commission on Tuesday updated its economic forecast for the rest of 2020 and 2021, which mostly projects steeper declines across the 27-member bloc.

World News // 5 hours ago
North Korea: 'No intention' to meet with the U.S. again
SEOUL, July 7 (UPI) -- North Korea on Tuesday doubled down on its stance that it had "no intention" of meeting with the United States again and criticized South Korea's "meddling" in its relationship with Washington.

World News // 7 hours ago
Britain sanctions dozens under new human rights regime
July 7 (UPI) -- Britain said it is imposing sanctions against dozens of people involved in committing the "most notorious" human rights violations including those it accuses of killing Sergei Magnitsky and Jamal Khashoggi.

World News // 21 hours ago
British universities face fiscal trouble due to COVID-19, study says
July 6 (UPI) -- As many as 13 British colleges and universities could fail financially without government support as a result of the coronavirus pandemic, a new analysis said Monday.